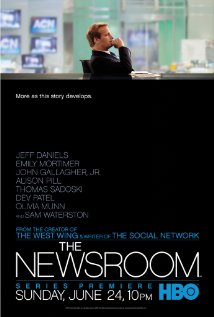 "The Newsroom" premieres tonight on HBO. No, it's not another 24-hour news show. It's fiction, written and created by Aaron Sorkin, the mind behind "The West Wing" on TV, "The Social Network" and "Moneyball" on the big screen, and "A Few Good Men" and "The Farnsworth Invention" on stage.

Sorkin has taken on politics, the internet, the military, baseball, sportscasting and the history of television in those projects, so perhaps the nightly news is a natural as his new forum to dissect, analyze and pontificate on issues, ethics and Why Things Are the Way They Are.

Although Sorkin has had some missteps (getting busted for drugs, high-profile relationships that became tabloid fodder, high-profile TV projects like "Studio 60 on the Sunset Strip" and "Sports Night" that were canceled quickly), he has also won an Oscar, six Emmys, awards from the Producers Guild and Writers Guild, and numerous other prizes and citations. And he is responsible for the pedi-conference style of rapid-fire dialogue while walking that has become a TV staple.

There is currently a lot of buzz about "The Newsroom" and its prospects. Is it "full of yelling and self-righteousness"? "Atonal and farcical"? Or maybe "the most important drama to make it to television in years"?

It certainly has a top-notch cast, with Jeff Daniels as a long-time news anchor who has an on-air meltdown, Emily Mortimer as his ex who is hired to produce (and save) his show, Sam Waterston as his boss and Jane Fonda as his boss, and Broadway actors Alison Pill, John Gallagher Jr. and Thomas Sadoski, plus Oscar-nominated Dev Patel and the very pretty Olivia Munn, presumably to attract some younger male viewers. She's playing a brilliant economist, a role that seems to pop up a lot in Sorkin projects, and while I suppose it's reasonable to think Munn has a brain, she's also traded on her sexpot status so much as an actress and comedian that I find it hard to believe she'll fit in amongst the likes of Daniels and Waterston.

But the big question is whether viewers will take to Sorkin's talky, high-flying, sometimes pretentious, sometimes inspiring style one more time. The presidency is a suitable subject to attack the big issues of our time, while a late-night comedy show was clearly not. What about the news biz?

Watch and see tonight on HBO at 9 pm Central time.
Posted by JulieK at 11:44 AM