I've watched a lot of daytime soaps in my time, but weirdly enough, the nighttime ones, like "Dallas" and "Knots Landing" and "Dynasty," all huge in the 80s, didn't really catch me. 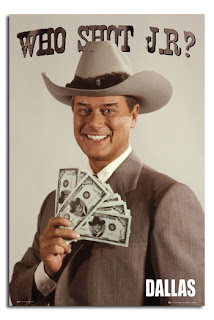 My biggest memory of "Dallas," actually, was being invited to a law school friend's apartment for a "Who Shot JR?" party on the night CBS had widely advertised for the big reveal of the culprit, but we stopped in Campustown at U of I on the way. I was in McBride's drugstore, and my husband was crossing 6th Street to come in there and meet me, but a car turned left from Green Street and ran right into him in the crosswalk. He wasn't hurt too badly, but he had a major dent in his thigh, meaning he couldn't drive, and we really felt he should go to the hospital to get checked out. Unfortunately, his car -- the only one we had between the two of us -- was an old red Volvo that happened to be stick shift, which I couldn't drive.

So that meant not only did I miss the party, but I had to call the party and grab a couple of other people away, too, as I asked two friends who could drive stick to come to Campustown in their own car and take both their car and our car to the hospital and wait with us.

The friend who was having the party said, "Wow, your husband will do anything to get out of my parties! He's even throwing himself in front of cars now."

Well, it was funny at the time. And I did find out later who shot JR. It was Bing Crosby's daughter. I'm not making that up. Actress Mary Crosby played Kristin Shepard, the sister of JR's wife Sue Ellen (Linda Gray), and she was an all-around bad girl. Kristin didn't make "Dallas," the new generation, now showing on TNT on Wednesday nights. That makes sense, of course, since Kristin was found face-down in a swimming pool on original recipe "Dallas." Not that the soaps haven't resurrected dead people before, but this time, they've let Kristin stay most sincerely dead, bringing along only her son, Christopher, who was a plot point (Infidelity! Who's the daddy? Lies! Blackmail!) way back then. 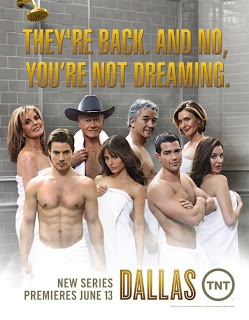 The new "Dallas" that includes Christopher, who was raised by JR's brother, Bobby Ewing, premiered last Wednesday with two episodes to get the party started. It also got smashing ratings.

I did tune in, and I was surprised to find that I remembered more of the Ewings than I would've expected. Here in the 21st century, JR, played by Larry Hagman, still giving the old dog a twinkle and a lot of panache along with the villainy, started out the episode hanging out in a nursing home, pretending to be catatonic, while his brother Bobby, the good one, full of warmth and charm as embodied by Patrick Duffy, was in charge of Southfork, the family ranch. Sue Ellen, JR's ex, still has the raccoon eyes and messy hair which were her trademarks, and now numerous people seem to be trying to get her to run for governor of Texas. (This means they apparently missed all those episodes of 80s "Dallas" where Sue Ellen was wracked with substance abuse and mental problems that would make her incredibly unfit to be governor of anything, including herself.)

Bobby's old wife, Pam, the one who saw him get out of the shower in the infamous series reset, didn't make the trip to New "Dallas," however. Now he has a wife named Ann (played by Brenda Strong, best known as Sue Ellen Mischke, the braless candy bar heiress on "Seinfeld" and the voice of Mary Alice Young, the ghostly narrator on "Desperate Housewives") who seems sensible and sweet. Bobby also has cancer, which he is hiding from his adopted son, Christopher.

It's Christopher and JR's son, John Ross, who make up the nucleus of the second generation of Ewing plots and counterplots. John Ross (given shifty good looks and a pencil-thin mustache by Josh Henderson) wants to drill, baby, drill on Southfork, but he is stymied by Bobby and Christopher (Jesse Metcalfe, another "Desperate Housewives" refugee), who is all about greener forms of energy. There's also a girl in the middle of the two Ewing boys, one Elena, daughter of the cook, played by Jordana Brewster.

The hitch is that Elena grew up with both boys but was in love with Christopher. Now, however, she is with John Ross, after somebody sent her a break-up email purportedly from Christopher on the eve of their wedding. She's supposed to be smart and a whiz at finding oil and other energy, even though she was stupid enough to buy an email generated from within the nest of snakes known as the Ewing family without texting or calling Christopher to say "WTF, dude???" or, you know, walking over to the other side of the house at Southfork and smacking him personally. But, hey, it's always inconvenient on soap operas to ask too many questions.

In any event, Elena took the email at face value, John Ross swooped in to pick up her pieces, and Christopher now has a new bride, pretty Rebecca (Julie Gonzalo). Rebecca is a lawyer who seems on the up-and-up and totally devoted to her groom, with seems being the operative word.

So far, there has been more focus on the oldsters than I expected. I thought JR and Bobby would merely be a launching pad for the sexy kids with the six-packs. But, no, we're getting good stuff involving JR and his maneuvers and schemes, Bobby and his wife and his cancer and his desire to carry out the wishes of his dead mama, Miss Ellie, and even Sue Ellen and her goofy gubernatorial ambitions. Down the road, it is rumored we will see the return of Cliff Barnes (Ken Kercheval), JR's perennial enemy. I'm hoping for some Ray Krebbs, too. Played by Steve Kanaly, ranch hand Ray was a slice of real life in the posh and wealthy world of the first "Dallas." He could've been killed off in the original series, too, of course. I admit I had only a passing knowledge of the goings-on on the show, and I only just found out that Ray was Bobby's illegitimate half-brother when I was adding the IMDB link to Steve Kanaly. Ah, soaps. Life and death are so easy to serve up.

And what did I think of the scam-packed first two episodes of "Dallas," part deux? I liked them. I paid attention. I was interested enough to read up and figure out where Christopher came from and why John Ross kept taunting him about not being a real Ewing. As always, Larry Hagman and the joyful evil he brings to JR make for some fun viewing. I still don't feel any real connection to a bunch of rich people in Texas, but, hey, their schemes and reversals, backstabbing and comeuppance, are pretty fun. I'm not at all surprised by the ratings. "Dallas" was a powerhouse in its heyday, with its slick production values and handsome cast, its ramped-up plots that throw everybody into bed with everybody else as well as into fights and conspiracies against everybody else, are bringing all that back in fine style. This "Dallas" is very easy to watch and I'm thinking a lot of people are going to get hooked.