"Bunheads" -- Gilmore Girls at the Ballet 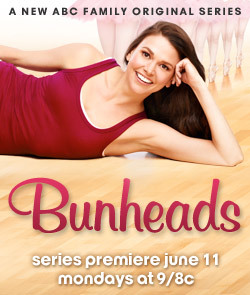 Although this new hour-long show from "Gilmore Girls" creator Amy Sherman-Palladino aired twice last night on ABC Family as its official premiere, the pilot episode has been floating around the internet for weeks. That means I saw one of its "exclusive" previews awhile ago. I watched it again last night, though, to see what I thought the second time through.

And here is your spoiler warning if you haven't seen the pilot episode yet. I am going to talk about all the plot. Now.

On the crucial question of whether Broadway star Sutton Foster (who won Tonys for her performances as a Leading Actress in both "Thoroughly Modern Millie" and "Anything Goes") comes off as well on the small screen as she does on stage, the answer is definitely yes. Foster is known more as a singer (if you've seen her do "Gimme Gimme" from "Millie," you are well aware of her big voice, but she also blasted out both "Defying Gravity" and "And I Am Telling You I'm Not Going" in a Kennedy Center performance where she was carrying a notebook with "The Big Book of High Belt Songs" written on the outside) but she can certainly dance (as evidenced by "Millie" and "Anything Goes") and, really, she can do pretty much anything (see her big "Show Off" number in "The Drowsy Chaperone.")

"Bunheads" certainly doesn't give her much chance to show off all those skills (especially singing) although it does showcase her effervescent personality and ability to race through rapid-fire dialogue. In fact, Sherman-Palladino's trademark snappy patter from "Gilmore Girls" is a big part of "Bunheads," so much so that Kelly Bishop, who played Lorelai Gilmore's acerbic mother and is now Foster's character's acerbic mother-in-law, even remarks on that fact in her own swift and sassy dialogue. You'll need to sit up and pay attention if you're going to keep track of the quips and banter in "Bunheads."

It's very intriguing that Kelly Bishop was brought into this new Sherman-Palladino show, as a matter of fact. Not just because Fanny Flowers is a slightly less starchy version of Emily Gilmore, but also because Fanny is running a ballet school, while Bishop (then called Carole Bishop -- the legend is she had to change her name for Equity reasons) originated the role of Sheila, the saucy siren with the memories of everything being beautiful "At the Ballet" in Broadway's "A Chorus Line." Putting Emily Gilmore v2.0 in a ballet school is like an in-joke inside an in-joke. Which is definitely reminiscent of "Gilmore Girls," where pop-culture references whizzed around constantly.

The other bit of "Bunheads" that is reminiscent of "Gilmore Girls" is the eccentric and adorable small town Sherman-Palladino has chosen as her setting. Like Stars Hollow, the new town of Paradise is supposed to be teeny-tiny, isolated, lovely in terms of its scenery, full of off-beat characters, and in general, exceedingly twee. In Paradise, they only sell dresses with ducks on them in their dress boutique, where we are to believe that the proprietor, whose name is Truly, makes all the clothes herself, including a dishy little black cocktail dress that doesn't look anything like anything else in the store and just happens to fit Michelle, Sutton Foster's character, perfectly, even though Truly has never met her and hates her on sight, since Truly has long harbored a massive crush on Hubbell, the guy who just married Michelle and brought her to town.

It seems clear that Truly is fated to become Michelle's new BFF, once she gets over that "You stole my beloved Hubbell!" issue and stops bursting into tears every five seconds.

Alan Ruck played Hubbell in the pilot, by the way, and he did a nice job with a kind of odd character, a guy who adores Michelle, the Vegas showgirl, and keeps pestering her with gifts and flowers even though she thinks he's a dweeb. But then he catches her on a bad day, after she was primed and ready for an audition for a Vegas production of "Chicago" but wasn't allowed to dance because she's too old. Rebuffed at the audition and unhappy with where her life as a dancer has taken her, Michelle agrees to marry Hubbell and run off to Paradise. Where she finds that he lives with his mother in a house stuffed with more creepy tchochkes than a Cracker Barrel and a Times Square souvenir store put together. As I said, Hubbell is a tough role. Ruck, who you may remember as Ferris Bueller's best friend, pulled it off nicely. Too bad he is apparently killed off at the end of the first episode.

That does solve a plot problem, of how to create love interests for Michelle when she is already married. But it also eliminates Ruck, who did such a nice job making Hubbell appealing, and makes you wonder why Michelle would continue hanging out in Paradise now that he's gone. I mean, his mother was insufferable to her, calling her a stripper and worse, and everybody else in town seemed to be following the same playbook. Now that Hubbell is kaput, why would Michelle hang around for that kind of abuse?

We see that Michelle does like the ballet class and the girls in it, bonding with them over how to audition and how to live the "bunhead" life of a ballerina. We see that she is sorry for how her life has ended up and sorry that she has wasted her dancing potential. But is that enough to keep her in Paradise, in the House of KnickKnack Horrors, living under the same roof as snotty, impossible Fanny?

I am guessing that the plot of the first few episodes will be that Michelle now owns the house, Fanny and Truly blame her for Hubbell's death, she digs in her heels and stays because one of the girls in the class needs her, there is a cute guy in town (played by Bobby Cannavale?) who runs the local diner or candy store or bookstore or something equally charming, and she and Fanny battle at every turn over how the little ballerinas should be schooled, who controls the house, who has the big bedroom with the great view, whether it's acceptable for Michelle to date the cute guy, and whether Michelle should go back to Vegas. And then 3/4 of the way through the summer, they will have a big blowup wherein Fanny reveals that she blames herself for Hubbell's death and has been behaving in such a beastly manner out of guilt, after which Michelle will forgive her and they will forge a new relationship.

Maybe I'm wrong. But it all seems pretty predictable so far.

My conclusion: I like "Bunheads" a little. I like Sutton Foster's on-screen persona a lot. I hope I'm wrong about where it's going and that it has some surprises in store. I guess we'll all find out Mondays at 8 Central on the ABC Family Network.
Posted by JulieK at 12:45 PM