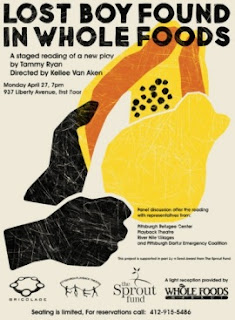 The American Theatre Critics Association held their annual conference in Chicago last week. As part of that gathering, ATCA announced that playwright Tammy Ryan had won the 2012 Francesca Primus Prize for her play "Lost Boy Found in Whole Foods." The Primus Prize gives Ryan a $10,000 cash prize along with a wall plaque.

The Primus Prize, which is awarded to "an emerging woman theater artist" comes from the ATCA in conjunction with the Francesca Ronnie Primus Foundation. The Foundation was created in 1997 to memorialize actress, critic and ATCA member Francesca Primus. Barry Primus, the administrator of the Foundation, noted that “The Francesca Ronnie Primus Foundation was established to recognize and support emerging women artists who are making a difference in the theater community in which they work.”

"Lost Boy Found in Whole Foods" involves a middle-aged white woman who runs across a "Lost Boy," a refugee from civil war in the Sudan, working at her local upscale grocery store. Christine, the woman, chats with and forms a friendship with the boy, who works in the produce section at her Whole Foods, eventually taking him home to live with her and her daughter. Ryan combines issues of international relations with the highly personal, as Christine's attempts to help Gabriel give her a sense of purpose and meaning she had previously been missing. For the ATCA, Pittsburgh theater critic Christopher Rawson wrote, “The person who is most truly lost amid middle-class comfort is...Christine." He adds, "[The play charts] the faltering, one-forward, one-back steps she takes to find her own usefulness and meaning.”

"Lost Boy Found in Whole Foods" was developed in 2009 as part of the New Harmony Project. The play went on to win the Premiere Stages Play Festival, after which Premiere Stages and Playwrights Theatre of New Jersey co-produced the play in September of 2010. The next year, Playhouse Rep in Pittsburgh staged a production that sold out its entire run. In reviews, Anita Gates called the play "remarkably touching" in the New York Times, while Sherri Rase simply said, "See. This. Play" for Q on Stage.

The ATCA indicates that the Primus Prize recognizes not only "Lost Boy Found in Whole Foods" and Tammy Ryan's general success as a playwright, but also her willingness to mentor young playwrights and "extend her expertise through teaching and collaborative projects like 'We Are Antigone,' developed with both high school and college students." Earlier this year, Ryan created From the Ground Up, a program which attempts to connect artistic directors of small theaters with emerging playwrights.

Ryan’s other plays include "FBI Girl: How I Learned to Crack My Father's Code," "Baby’s Blues," "Dark Part of the Forest," and "The Music Lesson." She has won numerous awards and citations, which you can see here. In 2011, Ryan worked with Turkish playwright Zeynep Kaçar on a one-act called "Lindsey’s Oyster," which was produced in both Turkey and the United States. "Oyster" is Ryan's and Kaçar's view of "what it means to be female in their vastly different societies." 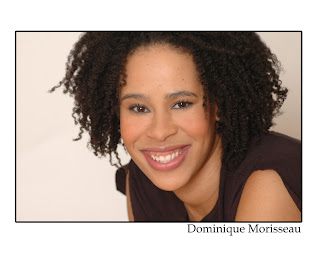 Playwright Dominique Morisseau was also singled out for a special commendation for her play, "Follow Me to Nellie’s," a look at "how a Mississippi brothel and its outspoken madam become entwined in the civil rights struggle to register black voters in 1955." "Nellie's" received a reading at the 2010 National Playwrights Conference at the O’Neill Theater Center before a full staging at Premiere Stages in New Jersey last summer. Morriseau is currently developing a trilogy of plays set in Detroit, her hometown, and also working on a play called "Sunset Baby," which is scheduled for a run in London later this year.

The ATCA's nationwide committee of critics chose Ryan and Morisseay from among a group of 22 nominees. Barbara Bannon of Salt Lake City chaired the committee, which included Julie York Coppens of Cincinnati, Marianne Evett of Boston, Lynn Rosen of Bellingham, Washington, and Herb Simpson of Geneseo, New York.

In addition to the Primus Prize, the ATCA also presents the Harold and Mimi Steinberg/ATCA New Play Award and the M. Elizabeth Osborn Award each year, as well as voting on and recommending the annual Tony Award for an outstanding regional theater and voting new members into the Theatre Hall of Fame. For more information, visit the ATCA website at www.americantheatrecritics.org.

The ATCA has also thoughtfully provided a list of former winners, which you will see below. Although the award is not limited to playwrights, most of the winners have indeed been playwrights. They are listed below with the plays for which they won, with Michelle Hensley and Karen Zacarius noted for the theater companies they are associated with and for which association they were awarded the Primus Prize.