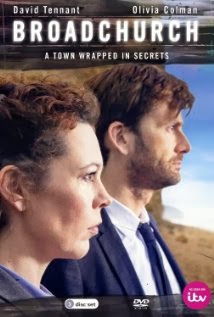 We all know the British are very good at the mystery thing. Agatha Christie, Dorothy L. Sayers, Arthur Conan Doyle, Josephine Tey, P.D. James, Simon Brett, Elizabeth George, Ruth Rendell, M.C. Beaton and Colin Dexter are just a sampling of the names that have graced the fronts of popular British mystery novels. And quite a few of those books have been adapted for television show that we can see on PBS or BBC America.

Agatha Christie and her Miss Marple set up the classic rules for what we now call the cozy, set in a charming small town with eccentric residents, where an equally charming amateur sleuth manages to ferret the truth of whodunnit out of the locals over afternoon tea. Later writers like Elizabeth George and Martha Grimes deepened the psychology of the characters as they added a sense of creeping darkness, cynicism and urban decay borrowed from the hardboiled side of the detective fiction aisle.

Broadchurch, a mystery series that first aired on ITV in Great Britain before finding a spot on BBC America here in the States, straddled the line between the cozy and the hardboiled. So, yes, Broadchurch was set in a small seaside village with eccentric locals, but it also featured both a male and a female sleuth from inside the ranks of the police department, a shocking crime -- the murder of a young boy -- at its center, and seamy details of sex, drugs, tabloids and unpleasant secrets at every turn.

Chris Chibnall, a playwright and television writer who'd worked on Doctor Who and Torchwood, created Broadchurch, and it starred Doctor Who No. 10, David Tennant, as one of its two sleuths. Tennant played Alec Hardy, a big-city detective with a murky past who came to Broadchurch looking for a quieter life. Detective Inspector Hardy is immediately paired with Detective Sergeant Ellie Miller, a woman who has lived her entire life in this small Dorset town. She is not happy to see him, since he's been given the position she hoped to be promoted to herself. But the murder of young Danny Latimer, the best friend of Ellie's son, means they must work together. It also means that Ellie will be investigating, questioning and poking into the secrets of her friends, relatives and neighbors if there is any hope of finding out what happened.

Broadchurch and its murder mystery played out over eight episodes, racking up ratings good enough to earn it a second season in Britain and an American remake from Fox called Gracepoint. It was immediately announced that Tennant would again star as the tortured detective attempting to solve the crime, although this time he'll be American. His compatriot from the British series, Olivia Colman, will no longer be at his side, however. BBC America announced that Anna Gunn, who played the wife of Bryan Cranston's drug lord in Breaking Bad, will instead portray the American version of the local detective trying to balance her loyalty to her family and friends against the reality of a murder investigation.

Also announced: Nick Nolte as a man who "runs the kayak rental on the beach as well as the local wildlife observation program," Josh Hamilton as Ellie's husband Joe, Michael Peña as the father of the murdered boy, Jacki Weaver as Susan Wright, "a mysterious townswoman who may know more about the crime than she’s telling," and Kevin Zegers as "a handsome, clever and extremely laid back young reporter on the local town newspaper."

So far, the characters seem to share the general names and descriptions of their British counterparts, indicating that the landscape of Gracepoint will resemble the one we saw in Broadchurch. So, for example, Gunn's and Hamilton's characters will still be called Ellie and Joe Miller and Weaver's Susan Wright matches Pauline Quirke's Susan Wright, the testy, secretive busybody who kept acting in a suspicious manner. Nolte's Jack Reinhold sounds a lot like David Bradley's Jack Marshall, who ran the "Sea Brigade," the boating and wildlife program for kids that Danny belonged to, and Michael Pena's morally ambiguous dad has become Mark Lasseter instead of Latimer. Reporter Olly Stevens has been changed to the more American-sounding Owen Burke for Kevin Zegers, but the character outline sounds the same.

One major exception to this soundalike trend: Tennant's Alec Hardy has inexplicably morphed into Emmett Carver, which makes him sound like a brawny backwoodsman who whittles wooden monkeys and bears for a living. David Tennant looks a lot more like an Alec Hardy if you ask me.

Names aside, the big question is how closely the Gracepoint mystery plot, and especially the ending, will hew to the British original. Leaving it the same may be problematic for viewers in the United States who already saw Broadchurch on BBC America, letting the cat out of the bag in a major way when it comes to the identity of the murderer. Strict secrecy was maintained during the filming of Broadchurch, after all, which indicates they expected suspense and surprise as they neared the end. And that means they may have to change Whodunnit and Why He or She Dunnit if they want the same effect for Gracepoint.

Filming is expected to begin in Canada in January, with the series to air on Fox as part of the 2014-15 season. Stay tuned for more casting and more clues...
Posted by JulieK at 2:52 PM