Plotting an ESCAPE for New Plays from the Heartland

Heartland Theatre has announced the theme and some of the details for its second new play contest. The first one -- this year called FOWL PLAYS -- is looking for ten-minute plays with some connection to birds, with eight winning plays to be presented in June, 2014. The second contest, NEW PLAYS FROM THE HEARTLAND, involves one-acts, here defined as 20 to 35 minutes in running time, or approximately 15 to 30 pages long.

In memory of Heartland's former Artistic Director, Mike Dobbins, who passed away last summer, the name of this contest, one which was very dear to Dobbins' heart, has been officially changed to the Mike Dobbins' Memorial NEW PLAYS FROM THE HEARTLAND Midwest One-Act Play Competition.

The theme chosen for these news plays is ESCAPE, and here's how that's defined:


Escape can be wonderful. But it can also be difficult or even desperate, whether you’re planning a vacation to Tahiti, taking steps to get out from under a dead-end job, dreaming of the day you can leave a terrible relationship, digging a tunnel one spoonful of dirt at a time, scrambling to flee a room with a ticking bomb, hanging upside-down in midair in front of a packed audience trying to pick seventeen locks and untie a strait jacket, looking for a way off a 4th story hotel balcony without giving up the diamond jewelry you just pinched from Lady Astor, wielding a sword to get away from post-Apocalyptic warlords, or simply looking for a path to the roof to see the stars.

Whether the escape in your play is good or bad, positive or negative, is up to you. As long as it's dramatic. So what else do you need to know to write a play for NEW PLAY FROM THE HEARTLAND?

This "Midwest" playwriting contest is open to playwrights in Illinois, Indiana, Iowa, Kentucky, Michigan, Missouri, Minnesota, Ohio and Wisconsin. If you live in one of those nine states, you are eligible.

The end result is a three-day event, including staged readings of the winning plays scheduled for July 18, 19 and 20, 2014 at Heartland Theatre, a master class for winning playwrights on Friday the 18th, and a public forum on Thursday, July 17, to introduce the "master" playwright to Heartland audiences.

Other requirements for your play: No more than six characters and no fewer than two, no musicals or children's plays, electronic submissions only, and only new plays. Oh, don't forget that Escape theme.

Another good piece of news is that Heartland is offering a prize of $150 to each of the three winning playwrights whose work is chosen. 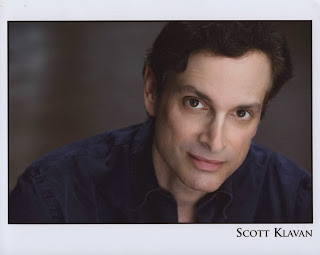 Those three winners will also earn the right to participate in the master class at Heartland Theatre in July. This year, that workshop will be under the direction of New York playwright, director and actor Scott Klavan. Klavan has appeared as an actor on and off-Broadway and in many regional theaters, plus he acted as Script and Story Analyst for legendary actors Paul Newman and Joanne Woodward for twenty years. He also worked in that capacity for companies including HBO, CAA in Los Angeles, Viacom, Warner Brothers and Universal. He now teaches therapeutic arts classes to seniors and teens and writes theatre reviews for "Escape Into Life," an online journals of the arts. Klavan is indeed a master of his craft(s) and his presence at the workshop at Heartland Theatre in July should be a big incentive to new and emerging playwrights.

Kathleen Kirk will act as dramaturg for the New Plays from the Heartland this year, and she will guide the scripts through the judging process as well as oversee the special master class with Klavan.

If you have a one-act play that fits the Escape theme and you live in the Midwest, this is a very special opportunity to hone your craft, see your work performed in a staged reading and win a cash prize along the way. For all the details, click here for the scoop on the theme and deadlines, here for rules, guidelines and entry info, and here for a general overview of Heartland's NEW PLAYS project.

If you have questions, you are directed to email newplays@heartlandtheatre.org
Posted by JulieK at 12:49 PM