Give Yourself SOMETHIN' REAL SPECIAL for Christmas 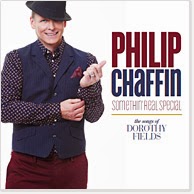 I am a major fan of PS Classics. This should come as no surprise, considering how often I write about their fascinating, varied and welcome choices of material. In order to "celebrate the heritage of Broadway and American song," PS Classics and executive producer Tommy Krasker resurrect and restore the scores of lost shows, record our cultural history, and offer a living archive not just of individual musicals, but of fabulous voices, composers, lyricists and orchestrators in solo albums and songbooks. Where else would Rebecca Luker get to do an album of Jerome Kern or fourteen Broadway stars take on the songs of Georgia Stitt? Where else will you find cast recordings of shows as disparate as Maury Yeston's 2011 Off-Broadway Death Takes a Holiday, the 2012 Encores! version of Merrily We Roll Along, and the adorable and wonderful Sweet Little Devil, a 1924 show with music by George Gershwin that was otherwise lost in time?

That's just the tip of the PS Classics catalog. Krasker has been very clear that he isn't trying to create  a complete collection of anything; he is simply working with whatever he likes best. "Somethin' Real Special: The Songs of Dorothy Fields," the new PS Classics album from Philip Chaffin, covers songs with lyrics by Dorothy Fields, but not necessarily a representative sample, not necessarily the best known, not necessarily the award winners. The songs on "Somethin' Real Special" are instead the ones that spoke to Chaffin and Krasker, the ones they wanted to spend time with.

The result is indeed something special, something Maury Yeston, who wrote the liner notes, describes as "elegance, exuberance and effortlessness." He's talking about both Fields' lyrics and Chaffin's voice, and he hits the target with that comment, I think. There's elegance and wit in the love songs, exuberance and fizzy charm in bouncy tunes from the 1920s, and an effortless flow throughout the album.

Chaffin has previously done three solo albums for PS Classics, including "Where Do I Go From You?," "Warm Spring Night," and "When the Wind Blows South," with songs from Irving Berlin, Gershwin, Jerry Herman, Michael John LaChiusa, Alan Menken, Frank Loesser, Cole Porter and a host of other composers. "Somethin' Real Special" is his first album with a focus like this, limited to one lyricist. That's interesting not only because Fields was so different in her time, as a successful female lyricist whose work spanned decades and styles, but also because she worked with such a varied group of songwriters. Chaffin's collection of songs shows what Fields' work was like with flowery, fizzy Sigmund Romberg as well as Jerome Kern in an airy, romantic mood, jazzy Jimmy McHugh or brash Cy Coleman. Fields navigated all those twists and turns and came up with, well, something really special.

Chaffin's warm, honeyed voice sounds just right on Fields' Oscar winner "The Way You Look Tonight," written with Kern for the Fred Astaire/Ginger Rogers' movie Swing Time, but it's paired here with a torchy Harold Arlen song called "Let Me Look at You" that brings out a fresh side of the more familiar movie tune. And the result is exquisite, dramatic, moving.

You will also recognize "I'm in the Mood for Love," a popular McHugh song from 1935. "Mood for Love" is given a lush big-band treatment as it glides into a 1932 McHugh piece called "Don't Blame Me" that is positively bewitching. When Chaffin sings "I'm under your spell," I dare you not to think, "Right back atcha."

McHugh was also responsible for the music of "Diga Diga Doo," a crazy little ditty -- about Samoa, Fields wrote "Talking there is not the mode. They palaver in a code" -- from a revue called Blackbirds of 1928 that bounces to a Roaring 20s/faux-primitive beat that makes me wish I knew how to Charleston, or, you know, dance the Diga Doo, as well as "Then You Went and Changed Your Mind," an adorable, jazz-infused piece from 1933 that kicks along from ukulele to tuba and trombone in the most infectious way, and "Exactly Like You," another sweetie pie from the 30s that Chaffin elevates to something more with sincerity and affection.

There's also a pair of Romberg songs from Up in Central Park, a 1945 Broadway show set in 19th century New York City. These are "Carousel in the Park," a melody that sounds pretty and sweet at first but devolves into something more ominous as Fields' lyrics move the carousel from daytime to night, and "April Snow," as light and delicate as the snowflakes -- and the love affair -- it describes.

Nine different orchestrators -- Matt Aument, John Baxindine, Doug Besterman, Jason Carr, Glen Daum, David Loud, Joseph Thalken, Jonathan Tunick and David Wolfson -- did the arrangements for individual songs, but somehow there's a unity here, flowing smoothly from song to song. I found "I'm in the Mood for Love/Don't Blame Me" and "Alone Too Long" from Daum, Carr's arrangement of "Then You Went and Changed Your Mind" and Baxindine's work on "Let Me Look at You/The Way You Look Tonight" especially affecting.

My conclusions? I don't know enough about Dorothy Fields, but this is a good start. Oh, and Philip Chaffin's ability to interpret a song is amazing, PS Classics is a national treasure, and "Somethin' Real Special" is about as special as it gets.
Posted by JulieK at 6:33 PM