Sunday has been the hottest night on television for some time, what with Boardwalk Empire, Breaking Bad, Downton Abbey, Games of Thrones, The Good Wife, Homeland, Mad Men, Masters of Sex, Once Upon a Time, Revenge and The Walking Dead all taking up residence there at one time or another over the year. Plus, of course, The Simpsons.

Several of those have concluded for the season (or forever, like Breaking Bad) by now, but another bunch of shows will be finishing their seasons tonight. The group airing fall finales tonight includes Once Upon a Time (Will Pan be foiled before the purple smoke rises again?), Revenge (Who's going to shoot Emily on her wedding day?) and Betrayal on ABC, Homeland (Will Brody make it?) on Showtime, Masters of Sex (Will Masters & Johnson go public with what they know?) on HBO, American Dad and Bob's Burgers on Fox, and The Witches of East End on Lifetime. 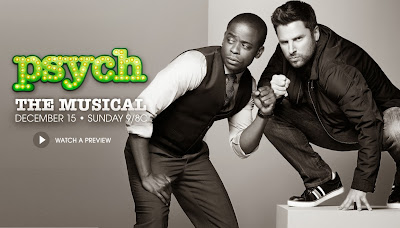 But amidst all the finale-ing, USA Network brings back its amusing buddy detective show, Psych, for a two-hour musical episode. Yes, you heard that right. Shawn, played by James Roday, and Gus, played by Dulé Hill, who danced on Broadway as the Kid in Bring in Da Noise, Bring in Da Funk before he turned into a West Wing aide, will be singing and dancing all over Santa Barbara as they solve crime and drive the police department crazy. You can see a video preview here, a sneak peek of a number called "Under Santa Barbara Skies" and a whole bunch of other video here, including a holiday greeting.

It all looks pretty fun and fizzy and the perfect Christmas gift from Psych creator Steve Franks and his cast and crew. Broadway World has a complete list of the songs (14 of 'em!) in tonight's show, as well as the info that another Broadway star, Anthony Rapp of Rent fame, will be along for the ride. And Barry Bostwick! Yes, Fitz's evil father from Scandal was once a singing and dancing man himself, as the original Danny Zuko in Grease on Broadway, a Tony Award winner for The Robber Bridegroom, and, of course, Brad Majors in The Rocky Horror Picture Show. Rapp will be the villain o' the week, a playwright called Z who burned down a theater with a critic in it, while Bostwick will play someone named Armitage. Bostwick isn't listed as a participant in the musical numbers, which seems like a waste, but Rapp is, along with Psych regulars Maggie Lawson, Tim Omundson, Kurt Fuller and Kirsten Nelson and guest stars Ally Sheedy and Jimmi Simpson (It's Always Sunny in Philadelphia).

Let the singing begin! Tonight at 8 Central on the USA Network.
Posted by JulieK at 11:27 AM