THE GOOD WIFE Hits the Fan Again Tonight at 7:30 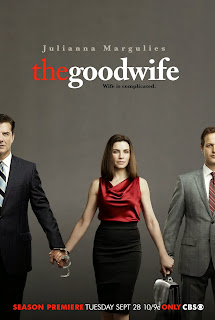 CBS's The Good Wife has been enjoying a banner season, with many critics calling it the best drama on television. Trouble and intrigue have been brewing for some time inside Lockhart Gardner, the law firm where the "good wife" in question, Alicia Florrick, played by Juliana Margulies, was made partner at the end of Season 4. It's also the law firm where Alicia's ex-lover (the Gardner in Lockhart Gardner) had to fight off charges of bribery and corruption to remain at the top of the food chain. For awhile now, Alicia has been torn between her feelings for Will Gardner, played by Josh Charles, and her loyalty to her family, including two complicated kids and an ethically challenged husband, the newly-elected Governor of Illinois, portrayed by Chris Noth. He's the guy who cheated on her in the huge scandal that started the show back in 2009.

Tension inside the firm, unresolved passion inside and outside the firm, problems with finances and ethics, dicey cases that put Alicia's prowess as a lawyer on the line... Let's just say there was lots of fuel for drama there. Push came to shove in the fifth episode of this fifth season, in an episode appropriately called "Hitting the Fan," when Alicia and a cadre of unhappy junior associates finally walked out on Lockhart Gardner to start their own firm. Since then, as we've seen various characters plot and counterplot, maneuver and manipulate, as everybody fights over turf and some new characters have introduced new complications, things have gone downhill a bit in my estimation. I would send a check to CBS myself if they would put an end to the beyond-annoying pregnant woman (and "ethics adviser") who works for the Governor, the new, mob-connected, somehow untouchable lawyer at Lockhart Gardner who keeps committing "pranks" that are actually felonies, and two old cranks at the firm who continue to stir the pot in ways that would and should get them disbarred. I'd also like to see Kalinda (Archie Panjabi) get more to do than just hop between the sheets and some focus on Cary (Matt Czuchry), Alicia's new partner, who seems to have been sidelined, as well.

And I have to say, if I have my objections to the way The Good Wife has followed up on Alicia & Company exiting Lockhart Gardner, it doesn't take anything away from "Hitting the Fan" itself, which was just about as perfect an hour of TV drama as you could wish for. 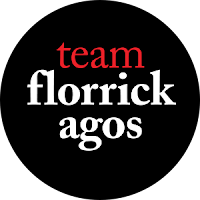 To help you catch up on The Good Wife, CBS is streaming all ten Season 5 episodes, from "Everything is Ending," the season premiere, to "The Decision Tree" from December 1. You can watch them all in order and decide for yourself if you agree with me on the perfection of "Hitting the Fan" and the annoyance factor in the five episodes since.

CBS is also showing "Hitting the Fan" all by itself at 7:30 pm Central time tonight, a bit earlier than The Good Wife's regular slot. By highlighting this episode, it would seem that CBS recognizes the brilliance of that particular episode. They aren't alone.
Posted by JulieK at 1:42 PM