Finishing Up Your FOWL PLAY for Heartland?

Heartland Theatre announced the new theme for its annual 10-minute play contest last summer, after the Package Plays were put to bed, with entries accepted as of September 1. For next summer's plays, the central idea is birds. And that's why they're calling them Fowl Plays.

The ultimate deadline for all entries is February 1, 2014, but January 1 is another important date. That's the date playwrights need to know if they want to be eligible for revisions. Since this is a new play contest, Heartland instituted the revision rule a few years ago, allowing their judges to ask playwrights for changes if they think there is something fairly easy to fix that would give the play a better chance to advance. So, for example, if there are five characters instead of the four allowed, but the judges otherwise really like the play and think eliminating that pesky No. 5 wouldn't be too tough, they can give the playwright the option of making that change. The same thing applies if the judges think the play would run longer than ten minutes as written. They can send a message through Heartland's 10-Minute Plays Administrator to see if the playwright would be willing to shave a page or two off the script so it better suits Heartland's needs.

That doesn't mean everybody automatically gets the chance to revise things. Just people who get their plays in by January 1 (so that there's time for revisions before the February deadline). And just with plays where there's something fairly simple to fix that could give the play a better shot in the contest. Playwrights have indicated in the past that the chance for revisions was a really positive thing for them, so don't underestimate that January 1 option.

As we wind down 2013 and head past Christmas, we're also seeing some fine inspiration for Fowl Plays in general, what with "The Twelve Days of Christmas" and all the birds it involves. Playwrights could write about any one of the following, after all:

4 Calling Birds
3 French Hens
2 Turtle Doves
And a Partridge in a Pear Tree... 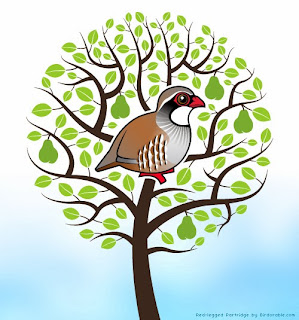 This particular partridge is from birdorable.com, a blog with all kinds of bird art, including "The Twelve Days of Christmas" sketched with representations of the real birds involved in the song. Just in case you wondered what a Calling Bird looks like... They've also interpreted Five Golden Rings as Five Gold-Ringed Tanagers and subbed in Twelve Drumming Ruffled Grouse, Eleven Piping Plovers, Ten Lord Howe Woodhens, Nine Lady Amherst's Pheasants and Eight Milky Storks to keep all "Twelve Days" avian. What more inspiration do you need? I'm kind of in love with those Gold-Ringed Tanagers.

For the whole scoop on Heartland's Fowl Plays, click here.
Posted by JulieK at 11:21 AM