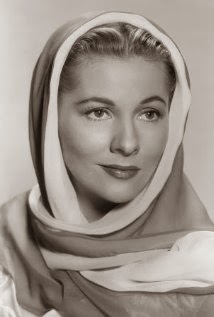 When Joan Fontaine passed away last Friday, my first thought was to wonder how Olivia de Havilland, her older sister, the other half of one of Hollywood's longest feuds, was taking the news.

Fontaine was her own person and her own actress, and when she died at 96, she probably hoped the obituaries would lead with her Best Actress Oscar for Suspicion (1941) and the nominations for Rebecca (1940) and The Constant Nymph (1943), or that she appeared on Broadway in Forty Carats and Tea and Sympathy, or that she was a strong supporter of US troops during World War II, working as a nurse's aide and appearing often at the Hollywood Canteen, or that she was very good at a whole lot of things, with flying planes and balloons, golfing, cooking, fishing and interior design among them. She supposedly had an IQ off the charts. And she did over two dozen TV roles, including The Love Boat and the soap Ryan's Hope, and all along, kept up a public persona as a gracious, elegant, cultivated woman. (See the headshot above. It oozes the classy, calm, serene and superior persona she was known for.)

But it's hard to get past her prickly personal life. There's the part about Fontaine and her sister not speaking to each other for decades, but also the fact that she was married four times, with the eight years wedded to Collier Young her record for longevity. She had two children, a daughter named Debbie with William Dozier, and an adopted daughter from Peru from whom she was also estranged. She wrote an autobiography called No Bed of Roses that second husband Dozier was rumored to have referred to as No Shred of Truth. 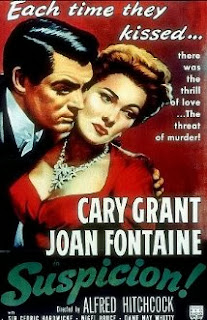 And, of course, she didn't get along with her sister. Things started to get rocky when they were both Oscar nominated for 1941 film appearances and Little Sis Fontaine walked away with the award. There are different versions of what happened to escalate the feud -- Joan snubbed Olivia's attempts to congratulate her after the Oscar win, Olivia snubbed Joan's attempt to congratulate her after her Oscar win, Olivia said something cutting in public, Joan said something cutting in public, somebody insulted somebody's husband, Mom always liked Olivia best, Olivia didn't invite Joan to their mother's memorial, Joan blew off the invitation to their mother's memorial, Joan's daughters were in touch with Olivia behind her back -- but whatever it was, it wasn't pretty.

Joan went on the record with The Hollywood Reporter, telling them, "I married first, won the Oscar before Olivia did, and if I die first, she’ll undoubtedly be livid because I beat her to it."

It's funny, because my mother loved Hitchcock movies, which is where Fontaine got her best roles. But she really didn't care for Joan Fontaine as an actress. My mom had a thing about the "goody goodies" -- she didn't like June Allyson or Doris Day, either -- and it may've been that Fontaine fit into that category in her mind. In movies like Rebecca and Suspicion, she really was a fairly languid screen presence, all meekness and dissolving vulnerability. Her character in Rebecca famously has no name, in Suspicion all she had to do was lie around acting helpless, opposite Cary Grant, of all people, and she didn't do much opposite Fred Astaire in A Damsel in Distress, either. Wasting Cary Grant and Fred Astaire on Joan Fontaine didn't sit well with my mother.

Or maybe it was the de Havilland thing. Even though Olivia played the quintessential good girl in Gone With the Wind, my mom loved her. So maybe she took her side in that feud.

I don't know and I suppose it doesn't really matter. It just shines a light on what it was to be a big Hollywood star in those golden years, when teenagers buying movie magazines decided they loved or hated you based on arbitrary things like your co-stars, who you beat for your Oscar, or a personal life they knew very little about. Wouldn't it be funny if Fontaine and de Havilland really got on just fine all those years, and the whole feud thing was just a plot by their press agents to keep them both at the top of the Hollywood heap?