Nice Work If You Can Get FRED ASTAIRE THE EARLY YEARS 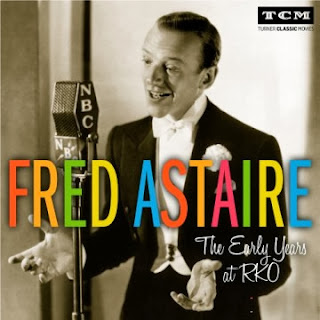 It was good news when Turner Classic Movies decided that this should be Fred Astaire Month, with his films on their schedule every Wednesday throughout December. It's even better news that, in conjunction with TCM and this Astaire celebration, Sony Masterworks has released a 2-CD set called "Fred Astaire: The Early Years at RKO." That means you can watch the movies and then listen to the music from those movies any time you feel like it. Which should be anytime and all the time. 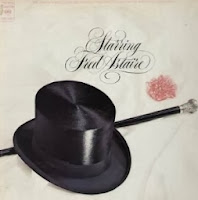 Way back when, when I was a teen, I was a huge fan of old movies in general, and Fred Astaire movies in particular. I remember a shopping trip to Woodfield Mall in Schaumburg when it was very new. I was looking through the bins at a record store, and I found a 2-record album called "Starring Fred Astaire." In my recollection, it cost $5.99, which was a lot of money for me at a time when I made $1.80 an hour working room service at a hotel. But as soon as I saw it, I knew I had to have it. How else would I be able to listen to Fred singing (and dancing -- there are taps on the album, too) without the movies coming up on Dialing for Dollars or The Late, Late Show?

The advent of video and DVDs, including the lovely Astaire & Rogers Ultimate Collector's Edition, have made it a whole lot easier to find Fred (and Ginger). Still... There's something different about sticking cds in the car or in the background without sitting down to watch the whole movie. Plus the coverage is slightly different.

That Astaire & Rogers Ultimate Collection includes Flying Down to Rio, The Gay Divorcee, Roberta, Top Hat, Follow the Fleet, Swing Time, Shall We Dance, Carefree, The Story of Vernon and Irene Castle, The Barkleys of Broadway, and a documentary called Astaire & Rogers: Partners in Rhythm.

"Starring Fred Astaire," by contrast, offers songs from Top Hat, Follow The Fleet, Swing Time, Shall We Dance, A Damsel In Distress and Carefree. A Damsel in Distress was not an Astaire/Rogers pic, but instead starred Joan Fontaine opposite Astaire. This album focuses on Astaire's RKO years and 19 songs from what are called the "Brunswick Recordings." Astaire had a recording contract with Brunswick (Ginger didn't -- she did records through Decca and Victor) at the same time he was making movies with RKO, which is why his performances from those particular movies were captured on vinyl at that time.

Because both "Starring Fred Astaire" and this new "Fred Astaire: The Early Years" come from the Brunswick recordings, there are similarities. But "Early Years" adds two songs from Flying Down to Rio in "Music Makes Me" and the title song and one important song -- "Night and Day" from The Gay Divorcee. Other extras include alternate takes of "A Fine Romance" from Swing Time and "They Can't Take That Away from Me" from Shall We Dance, plus Ginger's version of "I Used to Be Color Blind" from Carefree.

But "Early Years" is missing "I'm Building Up to an Awful Let-Down," a song co-written by Astaire, as well as Astaire singing either "I Used to Be Color Blind" or "Change Partners" from Carefree.

The extras are nice, but the best thing about "Early Years," is that you don't need a turntable to play it. And these songs, some charming, some fun, some torchy or romantic, some complete with taps, provide a wonderful record of what Fred Astaire was up to during the 1930s.

Oh, and it's a fabulous Christmas gift for anyone who needs one. You can buy it here at Turner Classic Movies or here at Amazon.
Posted by JulieK at 8:27 PM