SIX BY SONDHEIM: Tonight, Tonight Won't Be Just Any Night 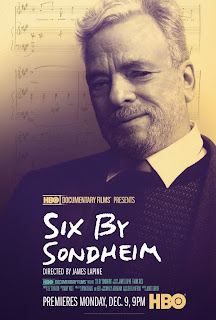 The lyrics for "Tonight" from West Side Story -- all the lyrics from West Side Story, from "The Jet Song" to "Somewhere" and "Gee, Officer Krupke" -- are wonderful. And who wrote them? Stephen Sondheim. So when I put "Tonight, tonight won't be just any night" in the header, yes, I was quoting his lyrics. But mostly I was referring to the fact that there's a special documentary on HBO tonight. It won't be just any night. Tonight there will be Six by Sondheim!

If you've read Sondheim's first book about his lyrics, Finishing the Hat, you know that he wasn't completely in love with what he wrote for West Side Story. Leonard Bernstein, the composer, wanted "poetic" lyrics that Sondheim felt were at odds with Arthur Laurents' dialogue as well as how he felt a boy like Tony and a girl like Maria would really speak. I'm guessing that will be part of the discussion in Six by Sondheim, which is structured around six songs in the Sondheim ouevre.

The first song discussed is "Something's Coming" from West Side Story, a show early in Sondheim's career for which he did the lyrics but not the music. That came from Bernstein, as noted above. For that reason, it provides an entry point into Sondheim's work for James Lapine, who directed this documentary. Lapine is a frequent collaborator with Sondheim; Lapine wrote the book for and directed Sunday in the Park with George, Into the Woods and Passion, directed Merrily We Roll Along, and conceived and directed Sondheim on Sondheim, a biographical Broadway show that used video and music to look at his life and work.

Six by Sondheim performs that same function, using six seminal pieces and Sondheim's thoughts about how and why he created them to chart the different phases in his career. Larry Kert, the first Tony in West Side Story, performs "Something's Coming" in a clip from the 50s, followed by "Opening Doors," the jaunty number about what it is to start out as an adult in the world from Merrily We Roll Along. For Six by Sondheim, "Opening Doors" gets a fresh performance from Glee's Darren Criss, Ugly Betty's America Ferrara, and Smash and Newsies star Jeremy Jordan, with Jackie Hoffman from The Addams Family, Laura Osnes, currently starring in Cinderella, and Stephen Sondheim himself in the mix.

Husband and wife Broadway stars Will Swenson and Audra McDonald, who is fresh off her triumph as the Abbess in The Sound of Music, will sing Sondheim's biggest hit as a single, "Send in the Clowns" from A Little Night Music, after we get a chance to see video of some of the very different artists -- Glynis Johns, Frank Sinatra, Cher -- who performed it over the years.

And then it's "I'm Still Here," the wry Follies song about surviving "good times and bum times," "plush velvet sometimes, sometimes just pretzels and beer..." Instead of giving it to the aging showgirl-turned-Hollywood-star described in Follies, Lapine turns the "I'm Still Here" segment over to director Todd Haynes, who has Jarvis Cocker of the rock band Pulp perform it in front of the kind of women it's about. A provocative choice, to be sure.

It's back to the vault for footage of Dean Jones trying to get "Being Alive" right, taken from the D.A. Pennebaker documentary about the recording of the cast album from the first Company. The evening ends with "Sunday," the soaring piece about how art can immortalize, as performed by Bernadette Peters and Mandy Patinkin in the Broadway production, captured for television broadcast on American Playhouse. Ending with "Sunday"? Perfection.

I loved Sondheim on Sondheim. I loved the two volumes he wrote -- Finishing the Hat and Look, I Made a Hat -- that go into detail about his lyrics. You can never get enough Sondheim, after all. Which is why Six by Sondheim is a must-see, tonight at 8 Central time on HBO.
Posted by JulieK at 12:47 PM