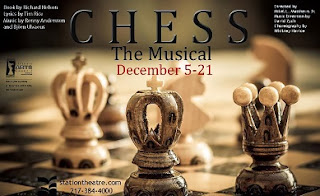 There was a day when chess champions from the United States and Russia vied not just for bragging rights across the board, but in international headlines, as well. As Cold War tensions remained high, the battle between American Bobby Fischer and Russian Boris Spassky for the World Championship in chess took on greater significance. A prize of $250,000 raised the stakes. When the two superstars, so different in approach and temperament, one shaped by the traditional, dominant Soviet system, the other an American loner known as much for his tics as his brilliance, met for 21 games played over two months in Iceland, the world watched to see who would ultimately checkmate whom.

The musical Chess, which opens tonight at the Station Theatre in Urbana, does not specifically deal with Fischer and Spassky, although there are certain similarities. There's an American and a Russian, and their match is played for higher stakes than just a few pawns, with political and diplomatic implications at every turn. But there's also romance, which was, as far as we know, not part of the famous 1972 World Championship, subplots involving defection, blackmail and selling out, action set in Thailand (to fit the show's most famous single "One Night in Bangkok"), and the inclusion of music written by the male half of ABBA, Benny Andersson and Björn Ulvaeus, with lyrics by frequent Andrew Lloyd Webber collaborator Tim Rice. Singing chess playes is quite a departure from the real deal! And that means that Chess may have been inspired by Fischer and the infamous match in Reykjavik, but the musical is its own, distinctive creation on stage. In the end, it isn't so much about the game of chess as it is about loyalty, responsibility, family and honor. Note that there have been several different versions of Richard Nelson's book over the show's lifetime to reflect changes in the political landscape of Eastern Europe as the Soviet Union fell.

The Station's version of Chess continues in performance through December 21. All the details are here on the show's Facebook page. The Station Theatre is located at 223 North Broadway in Urbana, and you may call 217-384-4000 for reservations.
Posted by JulieK at 12:45 PM