The delicious Downton Abbey, the confection that showcases the privileged classes in England enjoying their privileges (and occasionally enjoying their servants) in the first part of the 20th century, will begin airing its fourth season on PBS stations next Sunday, January 5. If you didn't know that, you haven't been paying attention, what with previews, sneak peeks, and behind the scenes video on new characters, current characters and how they get the history right.

There's even a spoofy musical version of a Downton Season 4 episode, performed at New York's 54 Below with glimpses of Laura Osnes and Jeremy Jordan -- she's the ghost of Lady Sybil and he's one of the new characters -- with Colin Mochrie playing creator Julian Fellowes, the narrator of this funny piece. Spoilers are sort of imbedded in that, although you pretty much have to have a scorecard to figure them out.

Still, with all the previews and casting news floating around, plus, of course, the fact that the episodes have already aired in England, there are lots and lots of spoilers out there if you want to find them. And I did. That means you will learn a whole bunch of things about who's doing what to whom in Season 4 if you keep reading past this point.


DANGER DANGER -- SPOILERS AHEAD!!!
INCLUDING THE PICTURES!!!

Are you ready? Okay then. Let's go.

Lady Mary (Michelle Dockery) and Tom Branson (Allen Leech) are still mourning the loss of their spouses, but also exploring the possibility of new love. No, not with each other. Mary is faced with a series of unsuitable suitors, from an engaged man, Anthony, Lord Gillingham (Tom Cullen), who also comes with an odious valet (Nigel Harman) who creates great difficulty for Anna and Bates; the return of the Honorable Evelyn Napier (Brendan Patricks), someone Mary once found too boring to consider; and Napier's boss, Charles Blake (Julian Ovenden), a dishy if somewhat abrasive type who arrives as part of a new economic plan for Downton. That plan involves pigs, of all things, which does not gladden the heart of Mary's father, Robert Crawley, Earl of Grantham (Hugh Bonneville).

Lady Edith (Laura Carmichael) may be overdue for a few moments of serenity, but she's not going to get it. In fact, Edith's affairs of the heart get even stormier when her married boss, Michael Gregson (Charles Edwards) larks off after the elusive prospect of a divorce. When trouble looms and Gregson is out of sight, Edith finds herself sharing secrets with her aunt, Lady Rosamund (Samantha Bond) and (reluctantly), her grandmother, the Dowager Countess (Maggie Smith), to chart her course.

Violet, the Dowager Countess, is also engaged in the usual battle of witticisms and insults with Isobel Crawley (Penelope Wilton), but Isobel may attract an admirer of her own when all is said and done. (Tally ho, Isobel!)

At the other end of the family tree, young and impressionable Rose (Lily James), the wild child in the family, is entranced by all the wrong sorts of men, including Jack Ross, a handsome African-American jazz singer (Gary Carr).

We also get to see more of Cora Crawley (Elizabeth McGovern) and her free-spirited American mum (Shirley MacLaine), with another member of the family – Cora's reckless brother Harold, played by Paul Giamatti – added to the mix.

The formidable Harriet Walter pops up as Lady Shackleton, a  pal of the Dowager Countess, and opera singer Kiri te Kanawa appears as -- you guessed it -- an opera singer!

Plus we'll get a peek at the Prince of Wales. This is Edward, the eldest son of George V and Queen Mary, the one who will eventually abdicate the throne so he can marry Wallis Simpson. That's years in the future, of course, but still fun to get to see him here, portrayed by actor Oliver Dimsdale as a bit of a lothario who needs help from a coterie of Crawleys.

Below stairs, there is no lack of love, but also no lack of heartache for Anna (Joanne Frogatt) and Bates (Brendan Coyle) -- see note above about Gillingham's evil valet -- plus the usual maneuvering and manipulation from Thomas (Rob James-Collier) and the return of Branson's stalker, that saucy minx Edna (MyAnna Buring) now playing at being a lady's maid.

Alfred (Matt Milne), the "hobbledy-hoy" footman, dreams of a life higher up the food chain, Molesley (Kevin Doyle) continues to try to find a spot (any spot!) for himself, and Jimmy (Ed Speelers), Ivy (Cara Theobald) and Daisy (Sophie McShera) hanker after each other (and Alfred) in a love quadrangle of sorts set around the kitchen, to the consternation of Mrs. Patmore (Lesley Nicol).

All that leaves is Mrs. Hughes (Phyllis Logan) and Carson (Jim Carter), who are in serious need of a day at the seashore. 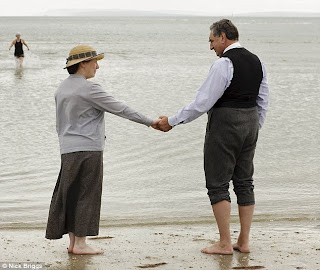 Well, it also leaves death, disappearance, cheating, assault, illicit love, a baby, blackmail, a train ticket, a stolen letter opener, stolen letters, and a few stolen kisses. It wouldn't be Downton Abbey without a tempest over the teacups, would it?
Posted by JulieK at 1:22 PM