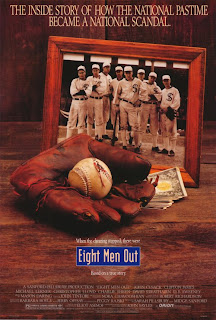 12. Take Me Out to the Ball Game (1949)
Another musical! And a real blast from the past, as Gene Kelly, Frank Sinatra and Jules Munshin portray baseball players (O'Brien, Ryan and Goldberg) in the early 20th century. O'Brien and Ryan tour in vaudeville during the off-season, just like real players Al Schacht and Nick Altrock did, to give Kelly and Sinatra plenty of opportunity for musical numbers. Their team's owner, played by Esther Williams, is a romantic foil for both of them, and the movie includes a song "O'Brien to Ryan to Goldberg" reminiscent of "Tinker to Evers to Chance," the catchphrase about the Cubs double-play combination.
Posted by JulieK at 2:44 PM