With April Upon Us...

I am a day late in setting up your theatrical options in April, but at least this way you know I'm not making it up. Everything here is really scheduled to happen on area stages and screens in April. Put on your roller skates. It's going to be a busy month! 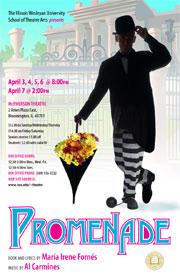 First up, tomorrow night we've got "Promenade," the absurdist musical about two prisoners (played by IWU students Will Henke and Isaac Sherman) escaping into a world that seems crazier than the one they left, at Illinois Wesleyan's McPherson Theatre. "Promenade," with music and lyrics by Cuban-American avant garde artist María Irene Fornés and book by Al Carmines, is directed by Jean Kerr, associate professor and choreographer at Illinois Wesleyan. If you want to see "Promenade," you'll need to get to McPherson Theatre this week, as the final performance is Saturday the 7th at 2 pm.

"Picnic" continues at Illinois State University's CW 207 through April 7,  with "La Bohème" in the Center for the Performing Arts, also through the 7th. "Picnic," directed by Lori Adams, has been selling out (it's in a small venue) so you are well-advised to make reservations if you can. And Connie de Veer's take on "La Bohème" is not to be missed, either, even though the CPA allows a little more breathing room when it comes to available seats. Just in case you still don't have your fill of ISU Theatre, Shakespeare's timeless political drama "Julius Caesar," directed by Christopher Dea, opens on the 5th, with performances until the 14th. See "Picnic," "La Bohème" or "Julius Caesar" now; do your taxes later. 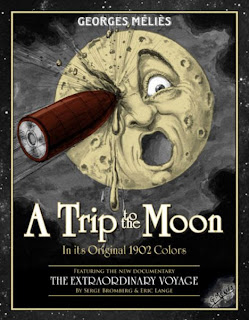 The Art Theater in Champaign is showing lots of amazing things this month, including a restored print of Georges Méliès' "A Trip to the Moon," which was showcased in last year's "Hugo," at 7:30 pm on April 4. The Art is also offering "Cave of Forgotten Dreams," Werner Herzog's documentary about the drawings inside the Chauvet caves of Southern France, "capturing the oldest known pictorial creations of humankind in their astonishing natural setting." This cave painting documentary comes to the Art on April 7 at 5 pm and April 8 at noon. On Sunday, April 15, look out for the filmed version of Oliver Goldsmith's comic romp "She Stoops to Conquer" from Britain's National Theatre Live program. I'm guessing that will also be a noon show, as their other National Theatre Live programs have been.

Here in Normal, the Normal Theater continues to highlight Oscar-nominated (and winning) films, with boffo Best Picture winner "The Artist" back on screen from April 5 to 8. All shows are at 7 pm. That's followed by "Albert Nobbs," the cross-dressing Glenn Close pic about a woman in Ireland in the mid-19th century who remakes herself as a man in order to find work in an uncertain world. "Albert Nobbs" runs April 12 to 15. The Tilda Swinton showcase "We Need to Talk About Kevin," a searing examination of parenthood and children who go wrong, is up next from April 19 to 22. 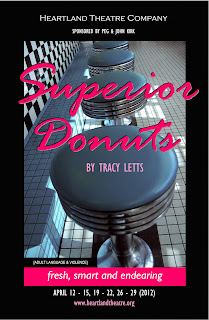 Heartland Theatre opens its production of Tracy Letts' "Superior Donuts" on April 12 with a special Pay-What-You-Can preview, with performances continuing through April 29. This "sharp little bite of Uptown life" is set in Chicago, and it involves the owner of a faded doughnut shop and the eccentric little family he's created for himself, including the Russian down the street, a couple of cops, and a homeless woman who isn't all there. Arthur Przybyszewski (pronounced more like Shubershevski) and his Superior Donuts have settled into a world-weary rut, but then new employee Franco Wicks comes along, bringing a spark of life and the hard reality of the outside world into Arthur's doughnut shop. Michael Pullin stars as Arthur, with Gregory Hicks as his new pal Franco. "Superior Donuts" is directed by Eric Thibodeaux-Thompson.

Also opening on the 12th over in Urbana is the Station Theatre's production of John Logan's "Red," about painter Mark Rothko and his tortured relationship with art and artistic integrity. Will he paint a mural commissioned for New York's posh Four Seasons restaurant, with its huge commission and murky ethical waters? Or will he try to keep his art above the petty demands of financial gain? Celebration Company Artistic Director Rick Orr directs Gary Ambler as Rothko and Jesse Angelo as his assistant in the two-hander that won the 2010 Tony Award for Best Play.

On Saturday, April 14, the Bloomington Center for the Performing Arts offers "Say Goodnight, Gracie," a one-man show featuring Alan Safier as George Burns, telling stories about his long life and his lifelong love for his comedy partner and wife, Gracie Allen.

"Alexander and the Terrible, Horrible, No Good, Very Bad Day," a musical stage adaptation of Judith Viorst’s award-winning children’s book, comes to Eureka College Theatre April 17 to 21. All performances are scheduled for 7:30 pm in Pritchard Theatre on the Eureka College campus. "Alexander" is directed by EC Theatre Professor Holly Rocke, someone you may've seen acting on area stages. (She's very good.) Her direction is also excellent as a matter of course and should create interest in the show whether you have children or not.

David Sedaris, billed as a "best-selling author, humorist and contributor to This American Life," brings his wry and entertaining musings to the Peoria Civic Center on Friday, April 20, celebrating the release of his newest book, "Squirrel Seeks Chipmunk: A Modest Bestiary." The book, which was released in September 2010, contains "acerbic, outrageously funny fables, featuring animals with unmistakably human failings." This "Evening with David Sedaris" is a one-night only event, and tickets are available at the Peoria Civic Center box office, online at ticketmaster.com, by phone at 800-745-3000. Travelzoo is also offering a discount on tickets if you don't have yours yet.

I have no particular information on anything happening to celebrate Shakespeare's birthday, usually attributed to April 23, but maybe we can rustle up a cake with 448 candles. I myself will be going to Chicago to see Simon Callow's one-man Shakespeare show, not on the 23rd, but close. Another option would be to take that day to order your subscription or single tickets to this summer's Illinois Shakespeare Festival, which will be offering "Othello" and "Comedy of Errors" from Shakespeare and Sheridan's "The Rivals," as well.

And that is most of April. I'm sure I will be adding things as the month progresses, so stay tuned.
Posted by JulieK at 11:24 AM