Simon Callow Lights Up "Being Shakespeare"

British actor/director/writer Simon Callow may be better known for his various appearances as Charles Dickens (including the BBC's "An Audience with Charles Dickens," in a one-man show called "The Mystery of Charles Dickens" and in two episodes of "Doctor Who"), but that doesn't mean he's a slouch when it comes to Shakespeare. 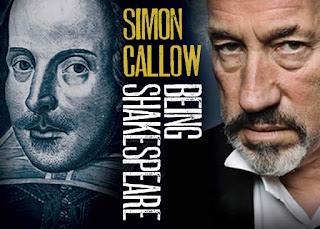 In his program notes for "Being Shakespeare," which runs through April 29 at Chicago's Broadway Playhouse in conjunction with the Chicago Shakespeare Theatre, Callow notes that his career as an actor began when he was still at school and he was assigned the role of Bottom in scenes from "A Midsummer Night's Dream" for a class exercise. Years later, or more precisely, five years out of Drama School, Callow took on the role of Titus Andronicus  at the Bristol Old Vic and he considered himself, as he puts it, "a Shakespeare virgin."

He continues, "[I]t was then and only then -- wrestling with this astonishing play during the course of which the youthful author graduates from bombast to some of his most profound explorations of grief and madness -- that I became deeply interested in the man who could have created it."

And there's the rub. Because we really don't know that much about Shakespeare. It's the absence of knowledge that has created all the speculation that Edmund de Vere or Christopher Marlowe or Francis Bacon or Queen Elizabeth or Miguel de Cervantes or a mysterious sheik named Zubayr was the real author of Shakespeare's plays.

Rather than going that route, Simon Callow and playwright Jonathan Bate use pieces from Shakespeare's sonnets and plays to create a plausible life story for William himself, the guy from Stratford. The structure of "Being Shakespeare" follows the "Seven Ages of Man" speech from "As You Like It," with Callow as a narrator who steps into various roles throughout -- from little Mamillius from "The Winter's Tale" to Juliet and Romeo, Falstaff, Macbeth, Prospero and Lear -- to illustrate those seven ages and how they might've been reflected in Shakespeare's own life. For the most part, that works quite well, and it's no surprise that Callow is marvelous in every role he takes on. His Bottom was wonderful, and the staging of that section, allowing him to play Peter Quince and Francis Flute, as well, was especially well accomplished.

A few chairs and props, a glimpse of trees behind a scrim or the shadow of a children's mobile, move the scenes along nicely, with excellent lighting effects from designer Bruno Poet that ratchet up the drama. The music and sound provided by Ben and Max Ringham are, on the other hand, rather more intrusive and obvious than they need to be, but luckily, Callow is big enough to offset them.

I'm not sure I learned anything new about Shakespeare the man, and I'm not sure I buy some of the assumptions the script makes about his sex life with Anne Hathaway, for example, but it's still all quite intriguing and fun, and educational in terms of Elizabethan life and culture. "Being Shakespeare" also made me want to see Simon Callow in a lot more Shakespearean roles. How about a Richard III or a Lear or a "Tempest" that tours the provinces? Or his Claudius opposite pretty much anybody as Hamlet?

"Being Shakespeare" is like an hors d'oeuvre in that respect, teasing us with Callow's powers with the poetry and the prose.

BEING SHAKESPEARE
By Jonathan Bate

Presented by the Chicago Shakespeare Theatre

Running time: 1:50, including one 20-minute intermission

For ticket information, click here.
Posted by JulieK at 1:30 PM