The Freestage program at ISU, which “provides an opportunity for students to produce, direct, act, and design experimental and original works on and off campus,” begins tonight with a show called “If You Like it Then You Should’a Put Some Gin in It,” written and performed by ISU undergrad Tori Allen, and Peter Sinn Nactreib’s “Boom,” a fun look at the end of the world. No, really! 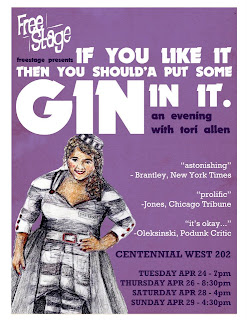 Allen’s show opens tonight with a 7 pm show at Centennial West 202, followed by performances Thursday at 8:30 pm, Saturday at 4 pm and Sunday at 4:30 pm. No word yet on what Allen is including in her original one-woman show, but she has graciously written some quotes for herself that promise this “Gin” is “astonishing,” “prolific” and “okay.”

So there you have it. If "astonishing," "prolific" and "okay" sound like your cup of gin, you'll want to catch Tori Allen's show. 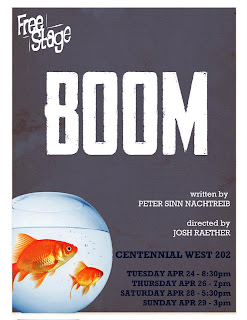 “Boom” is a short play (about 90 minutes in its New York production at Ars Nova in 2008) that features a narrator who may be a museum guide talking to us from the future, and two mismatched characters, a gay marine biologist who thinks the world is ending, and a journalism student looking for a hook-up.

They may be the last people on Earth. They may not be real, but simply a sort of diorama to explain the end of the world. Or maybe it’s all just crazy talk.

And as you may have guessed from the name Freestage, all performances are free.

(Note: The posters have Sunday at 3 pm in CW 202 for both “Boom” and “Freeze Tag.” Clearly it’s just one or the other. Based on the rest of the schedule, my guess is that 3 pm is really the spot for “Boom.” But that’s just a guess.)