One Act Bonanza at ISU This Weekend

The School of Theatre at Illinois State University is offering a slew of one acts this weekend. A slew of FREE one acts! With nine different plays on the schedule, you have a choice of two programs, each performed once on Saturday and once on Sunday. These plays are being presented by ISU's Directing Workshop and Advanced Lighting classes in Centennial West 202 under the acronym FT1A, which seems to stand for Freshmen/Transfer One Acts. This leads me to believe that the actors will be ISU freshmen and transfer students. But I'm just assuming that based on the FT1A thing. I may have to attend to figure that out unless someone from ISU wants to pop in and give us the scoop. 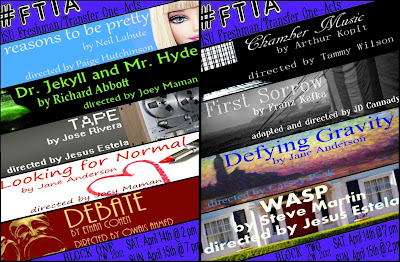 What they are calling "Block 1" contains the following plays: