If you attended anything theatrical in the 70s, whether high school, college or professional, you were likely to run across something absurd, something avant-garde, something existentialist or open or experimental or guerilla. My junior high dipped into Eugène Ionesco. My high school regularly put on Jean-Claude van Itallie. There was Beckett and Pirandello and Pinter at every turn. 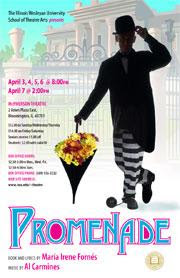 María Irene Fornés, the Cuban-American playwright behind "Fefu and her Friends" as well as the book and lyrics of "Promenade," the musical currently on stage at IWU's McPherson Theatre, is part of that same tradition, although "tradition" is probably the wrong word to use for a kind of theater whose primary focus was upending it. Fornés is associated with the Off-Off-Broadway movement, with an exploration and deconstruction of society and culture and what we used to call "the Establishment." I've seen varying numbers of Obie Awards associated with Fornés, although nine seems to be the most popular choice, but it's still clear that she has had her finger on the pulse of the theatrical world Off- and Off-Off Broadway for quite some time.

"Promenade," which was created in 1965, is part of the brighter, lighter, earlier part of the Fornés ouevre, and the Al Carmines score reflects that. His music is peppy and lively, even when the Fornés lyrics attached are about getting kicked in the head.

And there's a reason there are lyrics about getting kicked in the head. The two main characters in "Promenade" are sort of everymen, schlubs, Regular Old Guys, who happen to have numbers instead of names because they begin the play in a prison cell. Numbers 105 and 106, played and sung very nicely by Will Henke and Isaac Sherman for Illinois Wesleyan, tunnel their way out of jail, initially landing themselves in the midst of a posh society party. At the party, we see a coterie of rich fatheads playing an endless game of Change Partners, a lady pop out of a cake, a saucy maid who has an eye for jewelry, and an interruption from the jailer (Peter J. Studlo as a combination Inspector Clouseau/Station Inspector from "Hugo") who is on the trail of the escaped prisoners. There's a detour into a battlefield, a celebration of Spring, and another party with an Alice in Wonderland flourish. And that's what constitutes a "Promenade."

There isn't any particular rhyme or reason to where they go or what happens to be happening, but it's all performed with good humor and commitment from the ensemble here. IWU Associate Professor Jean MacFarland Kerr directs "Promenade" at McPherson, so it stands to reason that the choreography and staging would stand out. And they do. The dance moves are sharp and smart, and they create a sense of movement that helps the play stay entertaining and fun, instead of just inexplicable. I especially liked the prison break, the exchange of jackets, and the Maypole sequences, in terms of staging, and the general pace and tone of the piece.

Also on the production side, Bernadette Brennan's scenic design is handsome and effective, sort of industrial chic, with layers and levels and a nifty plastic kiddie slide, and Marcia K. McDonald's costume design is fun and bouncy, with lots of entertaining details in terms of boots and wigs and furbelows.

The ensemble as a whole is quite strong and quite tuneful, thanks to Musical Director Saundra DeAthos-Meers, who also conducts a lively orchestra. The Alphabet People (Misses I, O and U and Misters R, S and T, played by Jenna Haimes, Laura Martino, Abigail Root, Joseph Chu, Josh Levinson and Ben Mulgrew) play it big and as absurd as they can be, functioning nicely as a reminder that the rich are stupid and silly, plus they sound good when they sing and look good in their formal wear and déshabillé. I also enjoyed Caitlin Borek, very snappy and sardonic as the maid; Roz Prickel as Miss Cake, who adds good energy as the girl who jumps out of the cake; Rachel C. Grimes, another excellent singer who plays Mother, running around looking for her missing children; Marek Zurkowski and Zach Mahler as various characters, but best as a pair of soldiers who aren't sure why they're at war; and Michael Holding as a buffoon of a politician who keeps threatening to send people to jail.

I'm not sure what it all amounts to, to be honest, since Fornés seems quite content to let it unfold every which way and not mean anything at all. Kudos to Jean MacFarland Kerr for keeping the show's sense of humor at the forefront, and to her cast for jumping in and performing the heck out of Fornés' words and Carmines' music.

PROMENADE
Book and lyrics by María Irene Fornés and music by Al Carmines.