Greg Kotis is a genius. He's hilarious. His "Urinetown" (he wrote the book and co-wrote the lyrics) is one of the funniest and best meta-theatrical, neo-Brechtian pieces ever. And his “An Examination of the Whole Playwright/Actor Relationship Presented as Some Kind of Cop Show Parody” was one of the highlights of last year's Humana Festival for me. 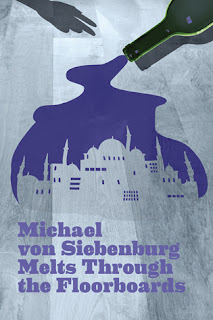 That's why it's such a disappointment that this year's full-length piece presented at the Humana Festval -- "Michael von Siebenburg Melts Through the Floorboards" -- seemed so off the mark. The story itself, about a sort of eternal cannibal/serial killer who knocks off young women to eat them and stay forever young, is complicated and grisly, not offering a whole lot of opportunities for the smart, clever humor that usually marks his work. We all expect Greg Kotis to be a little on the icky side when it comes to humor (remember, his biggest hit was called "Urinetown"), but main characters who snack on Ground Girl are are not exactly sympathetic, even though the rest of the plot tries to make us care that Michael von Siebenburg is going to melt and fade away. Program notes tell us the play was meant to be "a meditation on obsolescence, a bloody valentine to American progress, and a hilarious elegy for the glory days of vampire cannibalism," but it really doesn't play as any of that. Instead, I'd call it mixed-up, vague and somewhat tedious, wandering through minefields of sexism, religious zealotry and horror rather than making a statement on any of them.

The premise of "Michael von Siebenburg" sounds like it might be "Young Frankenstein" meets "Dexter," with a little sarcasm at the expense of "Twilight" or "True Blood" just for kicks. We see a dying 15th century Austrian soldier named Otto, brought to life with gusto by John Ahlin, a member of the army sent to defend Constantinople against "infidel" Turks. He and his fellow warriors, including a count named Michael von Siebenburg, are besieged with nothing to eat. (Cue Donner Party music.)  So, yes, Michael von S joins his fellow survivors in eating their enemies and friends, including his pal Otto. And somehow that gives him and the other Austrian cannibals eternal life.

Fast forward to modern day New York City, where Michael von Siebenburg, played as a slightly scruffy but well-meaning aristocrat by Rufus Collins, and a helper named Sammy, given a sheen of Eurotrash smugness by Micah Stock, target, woo and then butcher nubile young women. His landlady (perfectly performed by veteran actress Rita Gardner, the original Luisa in "The Fantasticks," according to her bio) suspects something is up and keeps calling the cops, who happen to be female, as well. Without fresh meat, Michael and Sammy are getting faint. And ghosts of Michael's past -- cranky Otto, who wants him to get back to the Quest for Constantinople, and lovely Maria (played by the lovely Caralyn Kozlowski), his wife back in Austria in 14-something -- have started to haunt him.

For me, "Michael von Siebenburg" turned out to be an odd and not very well seasoned stew. At well over two hours, it was also much too long to sustain the humor. And the addition of characters like the landlady and the hapless cops felt very old-fashioned, with its dark humor more like "Arsenic and Old Lace" than Monty Python. All in all, not a good mix for me.

MICHAEL VON SIEBENBURG MELTS THROUGH THE FLOORBOARDS
By Greg Kotis

Performances continue through April 15.
Posted by JulieK at 1:45 PM