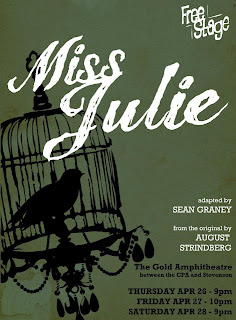 In addition to the four plays performed in Centennial West 202 this week as part of ISU's Freestage event, there's also a lone entry in the Gold Auditorium. This one is August Strindberg's "Miss Julie," a paragon of "Naturalism," as well as a steamy and fairly repugnant little play about class, sex, power and the feminine mystique. Okay, it's really more about Strindberg thinking uppity women needed to be shoved back in their cages, but still... It's a pretty popular play even now because of the sexual content. Everybody likes a play with Victorians getting all randy and sweaty and the stuck-up society girl playing dangerous games with the help, right? She should be above him, given her social rank. He should be above her, given his gender. She shouldn't be lusting after a lowly valet. He shouldn't be letting a woman push him around. Is the world going to end if nobody pays attention to the rules?

Strindberg  wrote his "Fröken Julie" in 1888, just before the world broke wide open with new freedoms that came along with the automobile and the airplane, the phonograph and the movies, revolution, socialism and the fall of monarchies. We usually call it "Miss Julie" (with the "miss" signifying that Julie was the daughter of an aristocrat), but I really like that "Fröken." Not because it sounds like a swear word, although that's fun, too. But mostly because it sounds so old-fashioned to me, that a girl like this one, who wants to use and be used sexually, who has supposedly been brought up all wrong by a (horrors!) feminist mother, still gets to have her honorific. "Miss Julie" doesn't sound so much like the product of another time. "Fröken Julie" does.

Sean Graney, one of the founders of the Chicago theatrical company called The Hypocrites, offered a new take on "Miss Julie" in 2008, and that's the version being used for the Freestage production. At The Hypocrites, the set was like a box that the audience walked around and sat inside, and the production seemed to move backward in time, as if it started now but, by the end, was stuck firmly in 1888. We'll see what they do in the Gold Auditorium.

"Miss Julie" opens its Freestage run tonight at 9 pm at the Gold Auditorium, which is between the Center for the Performing Arts and Stevenson Hall. After that, two more performances remain, with more "Miss Julie" at 10 pm on Friday and 9 pm Saturday.
Posted by JulieK at 2:28 PM