Are you back yet from Tuesday night's Freestage shows? Time to start planning for Wednesday's?

There are five shows in this year's Freestage, a part of ISU's School of Theatre designed to offer “an opportunity for students to produce, direct, act, and design experimental and original works on and off campus.” I told you about two of them earlier today, the ones that started tonight. Those two were Tori Allen's one-woman show called "If You Like It Then You Should'a Put Some Gin in It" and Peter Sinn Nachtreib's apocalyptic "Boom."

But tomorrow... Tomorrow we move on to two new shows. 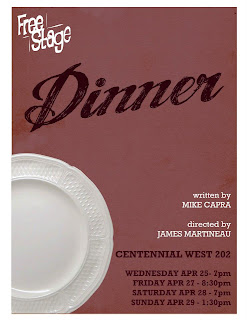 The first, scheduled for 7 pm at Centennial West 202, is "Dinner," written by Mike Capra and directed by James Martineau, which appears to be based on the short films Capra did for Youtube. Although I'm only seeing "Dinner: Meet the Karns" and "Dinner: Uncle Larry" on his channel, Capra refers to his work as a "treasure chest of underground comedy" and to "Dinner" specifically as a series where "we follow around the Karns family." That means we can expect a) comedy and b) family issues, as well as probably dinner of some sort. "Dinner" will continue at CW 202 Friday at 8:30 pm, Saturday at 7 pm, and Sunday at 1:30 pm. 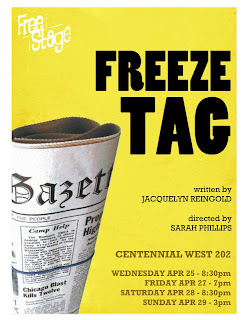 And the fourth piece in the 2012 Freestage collection is Jacquelyn Reingold's "Freeze Tag," a play called "gripping and hilarious" by the New York Times. It involves a woman named Andrea, innocently trying to buy a newspaper in the East Village, who instead finds a strange newspaper vendor who knows all her secrets. Samuel French describes the play this way: "In this funny and touching play, two women are forced to confront who they are, who they were, and what it means to be a friend."

And, yes, when it comes to Freestage, all shows are free of charge.

(Note: The posters have Sunday at 3 pm in CW 202 for both “Boom” and “Freeze Tag.” Clearly it’s just one or the other. Based on the rest of the schedule, my guess is that 3 pm is really the spot for “Boom,” with "Freeze Tag" at noon, to stay before its performances partner "Dinner." But that’s just a guess.)
Posted by JulieK at 10:49 PM