When I was young, I remember a controversial bumper sticker that showed Lucy, the pushy girl from Charles Schulz's "Peanuts" comic strip, hugely pregnant. I don't remember what the caption was, but it was something like, "Damn you, Charlie Brown!" It seems tame now, but at the time, a lot of people were upset that somebody would subvert the sweet little "Peanuts" characters that way. I seem to recall lawsuits and general dismay. I thought it was funny. But, hey, I was a kid.

Bert V. Royal, the writer behind the movie "Easy A," goes a lot farther than that in his play "Dog Sees God: Confessions of a Teenage Blockhead." He doesn't use the actual names of the Peanuts characters, but there's a guy named CB at the center of it, with "Van" instead of Linus van Pelt, "Beethoven" for Schroeder, the piano-playing kid, "Tricia" instead of Peppermint Patty, "Marcy" with a y instead of Marcie with ie, and "Matt" as a cleaned-up Pigpen. Sally and Lucy are reduced to merely "C.B.'s sister" and "Van's sister," respectively. Royal has aged them all to their high school years, and given each of them enough angst and misery to fuel six teen soap operas. Or maybe one day in Lindsay Lohan's life.

So our main character CB is mourning the loss of his dog, clearly Snoopy, who had to be put down after contracting rabies and chomping on a small yellow bird we recognize as Woodstock, while his sister, currently going through a Goth Wiccan phase, has a crush on the Beethoven version of Schroeder, who is constantly bullied because his father molested him. At some point in the recent past, CB conspired with Lucy, now completely bonkers and in an institution after she set the Little Red-Headed Girl's hair on fire, to burn Van's beloved blanket, as well. Van is a stoner, Tricia and Marcy are vapid party girls chugging gin and vodka with their chocolate milk and having sex with whoever they can nab, and Matt has cleaned up his former Pigpen ways by becoming a thug and a bully.

It's hard not to imagine that this play is the product of some self-absorbed teen with an ax to grind, deliberately making each plot element and each character backstory as nasty and over the top as possible, wallowing in the excess. It's hard not to imagine that Bert V. Royal came up with these plot elements and character problems just to show how sarcastic and outrageous he can be. It's telling to me that Sally and Lucy don't get names but are instead defined as some guy's sister, and poor Lucy only gets one scene. Not very interested in the girls, are we, Bert V?

Royal says he was interested in deeper issues, about what happens when your creator leaves you behind, as Charles Schulz left behind his "Peanuts" characters when he died. “What would you do in the absence of God or your creator?” Royal asks in this interview.

That's actually an interesting question and one I wish I'd seen more of in "Dog Sees God." Instead, what we get in the Phoenix Theatre production of the play at IWU is dark, smirky teen drama, with the script not nearly good enough to support the talents of the actors who are trying to bring it to life. And that's a shame.

When the play nears its conclusion and turns from send-up to something more heartfelt, actors Josh Conrad, Geena Barry and Jordan Lipes tap into real emotion, giving this "Dog Sees God" a moving conclusion and making me wish that its cast had a better vehicle to showcase what they can do.

As it is, Conrad carries the show from beginning to end. He's a very watchable actor and he manages the difficult trick of making his CB a root-for character, someone with a brain and a heart in the midst of emptiness. Geena Barry gives Sally (er, "CB's Sister") good energy and vulnerability, as well, and she really nails Sally's epilogue speech, while Jordan Lipes is consistently sincere and wounded enough to make us care about Beethoven. 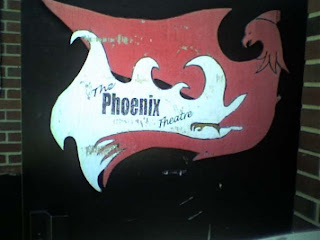