I will admit right up front that I am not a hip hop fan, that I don't know a whole lot about hip hop, and the idea of Idris Goodwin's "How We Got On" -- the "flip side to the A story of hip hop's rise in the late 1980s" -- did not inspire me with confidence. 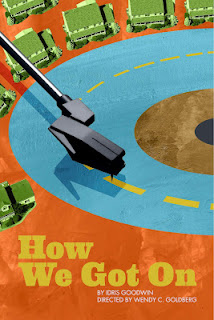 But Goodwin did several very smart things when crafting his story. He linked what he wanted to say about this "flip side" to three appealing characters, he used a wise narrator who assumes many roles as she spins her records and clues us in on the history, and he and director Wendy C. Goldberg cast the play beautifully, to make those characters come even more alive.

The "flip side" refers to the fact that the kids Goodwin focuses on are not in the South Bronx, where hip hop culture began, but instead, in the middle of the country. Where isn't specified, except outside some Midwestern city. Could be Chicago. Could be Detroit. Maybe even Cleveland. But these characters are not street kids. They're living in predominantly white suburbs, and they are "forging a cultural identity" in the midst of nowhere when they battle it out with poetry and boomboxes in the wide open parking lot at the shopping mall.

Goodwin gives us Hank, a black teenager whose dad would prefer his son get good grades and concentrate on something more high-brow than hip hop; Julian, biracial and looking for his own way to shine since he comes from a family of overachievers; and Luann, a prim-looking schoolgirl whose dad is in the NBA. Hank can write poetry like nobody's business, but he's not the best performer. Julian is a terrific performer, but has no talent for rhymes, so he's not creating anything, just memorizing other people's stuff. And Luann is good at everything, but nobody will take her seriously since a) she's a girl, and b) her preppy exterior looks anything but fly.

Terrell Donnell Sledge, Brian Quijada and Deonna Bouye are all excellent in the roles, hitting the right note of youth without making their characters too young or too silly or stereotypical in any way. I especially liked the surface note of brash confidence Quijada brought to Julian, while exposing so much vulnerability underneath.

Tying it all together is Crystal Fox as the "Selector," the voice of all the parents/DJ/MC who serves up context and history in a very entertaining way. Fox is fabulous, the kind of DJ everybody wants to spin the soundtrack of their lives.

The humor and real feeling in "How We Got On" make it work as a piece of theater as well as a slice of history, and I thoroughly enjoyed it from beginning to end.

HOW WE GOT ON
By Idris Goodwin