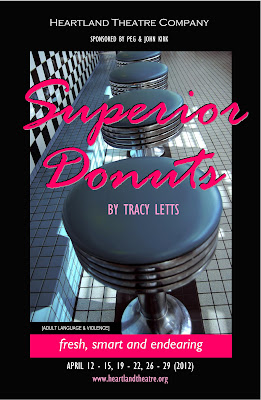 Tracy Letts hit it big with "August: Osage County," a scorching play about family bonds and family destruction that earned him the 2008 Pulitzer Prize for Drama. He has been a member of Chicago's Steppenwolf ensemble since 2002, appearing as an actor there in a range of plays from "Glengarry Glen Ross" to "Who's Afraid of Virginia Woolf?" But "Superior Donuts," which opened at Steppenwolf in 2008 before transferring to Broadway, is the first play Letts has written set in his adopted hometown.

Everything about "Superior Donuts" says Chicago. There's a Polish-American guy from Jefferson Park who owns a doughnut shop in Uptown, and his store is frequented by a streetwise kid whose mom works in the cafeteria at Senn, an Irish-American cop, a gambler from Bridgeport, and a Russian immigrant from down the street who owns an electronics store. It has a real neighborhood feel, focusing on the kind of family-owned business that has always been a mainstay in Chicago but is disappearing in the wake of Starbucks and Krispy Kreme on every corner. If nothing else, "Superior Donuts" serves as a comment on and commemoration of a distinctive Chicago way of life, marked in time before it's gone completely.

Heartland Theatre Company and director Eric Thibodeaux-Thompson bring "Superior Donuts" and its Chicago stylings to Normal beginning tonight, with performances running through April 29. You can see the complete list of performances here if you're interested in choosing a night that suits your schedule. Reservations are strongly encouraged, except for opening night, which is a special Pay-What-You-Can preview performance where no reservations are accepted.

In Heartland's production, Michael Pullin plays Arthur Przybyszewski (it's pronounced Shu-ber-shev-ski), the world-weary man inside the doughnut shop, while Gregory D. Hicks takes on the role of Franco Wicks, an energetic black kid who needs a job and gets his foot in the door in Arthur's store.

Pullin has been seen many times on area stages, most recently as a wealthy stamp collector (and the polar opposite of Arthur Przybyszewski) in "Mauritius." He is also Heartland Theatre's resident scenic designer, and, yes, he did the "superior" set you'll see in "Superior Donuts."

Hicks is active with New Route Theatre and ISU's Black Actors Guild, where he coordinated and appeared in "The Mystical Willie Lynch" last month, and he appeared in Heartland Theatre's "Three for the Show" and 10-Minute Play Festival in 2010.

The supporting cast includes Heartland board president Todd Wineburner, who was seen to such good effect in Deborah Zoe Laufer's "Sirens" at Heartland last fall, and Clark Abraham, who did excellent work in Joel Drake Johnson's "The End of the Tour" last spring. Wineburner plays Max, the friendly (and ambitious) Russian from down the street, while Abraham portrays Luther Flynn, a scary bookie who doesn't look kindly on people who owe him money.

They are aided by Cathy Sutliff and Marcus Smith as a pair of beat cops who keep coming back to Superior Donuts, Holly Klass as a slightly dotty bag lady who thinks of the place as her own, and Aric Rattan and Jay Hartzler as two different kinds of muscle.

"Superior Donuts" is at times funny, profane, sweet, profound and affecting. It fits perfectly within Heartland Theatre's commitment to offer theater that means something, that touches the human heart and expounds on the human condition. You may leave yearning for doughnuts or for old school neighborhood stores, but you will also find a fulfilling dramatic experience.

Running time: 2:20, including one 10-minute intermission