The Discovery Walk, bringing "history to life through costumed actors assuming the intriguing characters of McLean County’s ancestors," comes to Bloomington's Evergreen Cemetery every fall. As a collaboration among the McLean County Museum of History, Illinois Voices Theatre and Evergreen Cemetery, the event offers a unique perspective on the people who helped form the Bloomington-Normal community we currently enjoy. 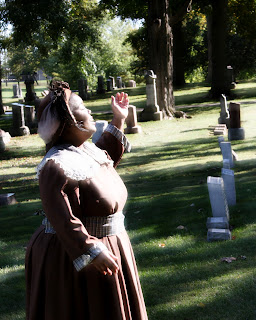 It's also a huge production, with actors, writers, designers, museum staffers, and a whole lot of volunteers working behind and in front of the scenes to keep it running smoothly. After the new year's characters have been chosen, Judy Brown, Artistic Director of Illinois Voices, commissions scripts from area writers, and then auditions and rehearses actors, gets a costumer, and puts the pieces together.

So which curious characters from our communal past will be portrayed this year? From the Museum's list:

Madame Annette
Mystery woman. The name is a pseudonym from the Daily Bulletin, for which she did interviews with "a wide variety of McLean County luminaries." Who was she really, behind the pseudonym? Nobody knows, apparently not even the people she interviewed!

Benjamin Franklin Funk (1838-1909)
Visionary. Politico. As one of the ten children of Isaac and Cassandra Funk, who founded (and gave their name to) Funk's Grove, he had to try hard to set himself apart. He did just that, with service as mayor of Bloomington, president of the board of trustees at IWU, and a term in the U.S. Congress.

W. C. Hobbs (1800-1861)
Fashionable Man About Town. Hobbs was a bit of a dandy who set the bar for other fashionable gents and ladies, as Bloomington attempted to be a bit more civil and cultivated than other small towns in the Midwest.

Sophia Huggins (1831-1903)
Fortune teller. For the purposes of the Discovery Walk, she will speak to Madame Annette about some of the people she offered predictions and psychic counsel to.

Isaac "Ike" Sanders (1878-1929)
Driver. Restaurateur. After a stint as driver for Adlai Stevenson I (he left the job when "he felt disrespected by Mrs. Stevenson") Sanders ran a restaurant called the Workingman's Club that catered to a clientele that included both black and white miners and railroad workers.

Georgina Trotter (1836-1904)
"A power in the education affairs of Bloomington." Trotter is descibed as "a dynamo of energy" who worked as a nurse during the Civil War, and then ran a successful coal, grain and lumber business with her brother John. A big supporter of local libraries, she was also the single mother of an adopted daughter and the first woman elected to the local board of education.

Gerald "Jerry" Wonderlich (1889-1937)
Racecar driver. Hollywood Romeo. Wonderlich was a famous racecar driver with two starts in the Indy 500 (1922 and 1924). He turned his driving prowess into a career as a stunt driver in Hollywood, where he made tabloid headlines with rumors of a romance (and a secret marriage?) with movie star Agnes Ayres, star of "The Sheik."

The 2012 Discovery Walk is scheduled for September 29 and 30 and October 6 and 7. Tickets will be available beginning September 4.
Posted by JulieK at 11:46 AM