Heartland Theatre Company has announced that it is dedicating its 2012-13 season to Michael Pullin, the resident scenic designer, actor and colleague who passed away August 7th. 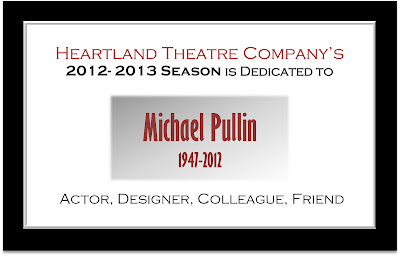 The notice you see above will appear in all of the programs for Heartland shows this season, as well as on the Season page of the Heartland website.

Pullin was a huge part of the Heartland family, and the Heartland Board of Directors felt strongly that this season should be dedicated to his memory. He had already put together plans for the scenic design for "These Shining Lives" and he also planned to star in and design the set for "Red." Michael's absence will be felt keenly in those shows, but his presence will be there, too.

"These Shining Lives," directed by Don LaCasse, is in rehearsal now, with a cast that includes Colleen Longo, Paula Nowak, Reena Artman, Christine Wing, Jared Kugler and Todd Wineburner. Playwright Melanie Marnich wrote this story about "Radium Girls," happy to have found a life as working women in the 1920s, but betrayed terribly and completely by the company they work for. As they dip their tiny paintbrushes in radium-loaded paint, licking the brushes to make precise, glowing numbers on watch dials, they are poisoning themselves. It's a play about women's work and self-worth, life and death, the freshness of youth and the tragedy of turning old before your time.

Heartland's production of the play opens September 6 with a special Pay-What-You-Can Preview, followed by performances September 7-9, 13-16 and 20-29. To see performance dates and times as well as reservation information, click here.
Posted by JulieK at 8:20 PM