It's Claude Rains Day on TCM! 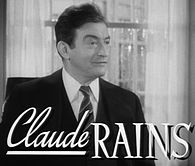 Turner Classic Movies has chosen today to celebrate the wonderful character actor Claude Rains, airing 13 of his movies, from 1933's "The Invisible Man" at 7 pm Central to 1963's "Twilight of Honor" at 3:15 am.

Most of these are not Claude Rains-centric movies, but star vehicles for somebody else, like "Now, Voyager," one of my mother's favorite movies, that shows up at 3:45 pm this afternoon. That one puts Bette Davis in the spotlight, playing an introverted, lonely woman who takes a cruise as part of an attempt to live a more full life, and there falls in love with a married man, played by the dashing Paul Henreid. He holds two cigarettes in his mouth, lights them both and hands her one of them in a swoony, indelible romantic gesture, and even though they both know their love affair is impossible, she says, "Oh, Jerry, don't let's ask for the moon. We have the stars," in a swoony, indelible romantic line. Rains plays the therapist who encourages her to turn her life around, to go from a frump under her mother's thumb to a stylish, elegant beauty who takes the fateful cruise. It's definitely Bette's movie. She and Gladys Cooper, as her domineering mother, were nominated for Oscars. Rains was not.

"The Invisible Man," the marquee movie at 7, is clearly a Rains piece, however. The trick is that he's invisible for most of the film. Still, that cultured, rich Rains voice is front and center, and he does a terrific job communicating the character of the brilliant scientist who invents an invisibility potion, succeeds in making himself invisible, but also succeeds in driving himself insane. "Invisible Man" was Claude Rains' first Hollywood film after a distinguished stage career (and one silent film) in England. He'd also been a teacher at the Royal Academy of Dramatic Arts.

"The Invisible Man" made Claude Rains a star, but a star as a character actor rather than a leading man, one who made his biggest impact in supporting roles. If I were running Claude Rains Day at TCM, I would've tried to include "Casablanca," where Rains is as adorable as he is unforgettable as Captain Renault, the one who begins a "beautiful friendship" with Humphrey Bogart's Rick, and Alfred Hitchcock's fabulous "Notorious," where Rains is part of a group of Nazi expats living in Rio de Janeiro. His Alexander Sebastian loses his heart to Ingrid Bergman, who is romancing him to undermine him and his fellow Nazis, with help from her real love, Cary Grant. Hitchcock was known for his three-dimensional, appealing villains, and Alexander Sebastian was one of his best. You can't help but feel pangs of sympathy for this small, sweet man who pins his romantic hopes on lovely, luminous, larger Ingrid Bergman. Rains' performances shows the glimmer of hope in his eyes, the fear that she isn't for real, and the dawning awareness that he has really screwed up. Rains makes you care for Sebastian, even though he's a Nazi. That's no mean feat.

"Notorious" is a wonderful movie in a lot of other ways, too, with Cary Grant being all gorgeous and sexy (as well as nasty and dark), Bergman beautiful and vulnerable, and Hitchcock using lighting, camera angles and creepy supporting actors to ratchet up the suspense (both the romantic and spy-story variety) as the film moves along. 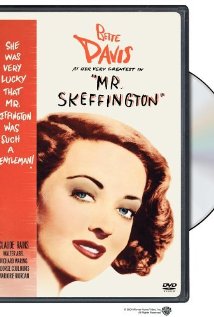 Rains was nominated for Best Supporting Actor Oscars for both "Casablanca" and my beloved "Notorious," as well as "Mr. Smith Goes to Washington," where he played the corrupt Senator Paine, and "Mr. Skeffington," another TCM choice, where he was paired with Bette Davis again. In that one, he was Bette's Jewish husband, someone she married for reasons other than love. It may be called "Mr. Skeffington," but Mrs. Skeffington, a spoiled, fickle beauty who wreaks havoc on the lives around her, is the star all the way through. But Claude Rains does his usual excellent work, making you feel for the little guy who never gets the girl, but shows intelligence, compassion and charisma just the same.