You may've seen actor Mickey O'Sullivan during his career in Bloomington-Normal -- he played everything from C. K. Dexter Haven in ISU's "Philadelphia Story" to Captain John McNulta, making visitors to the Discovery Walk at Evergreen Cemetery drop and give him twenty, to a (fictional) hard-boiled detective taking a fall in Jessica Wisniewski's "It's All in My Head" at Heartland Theatre. 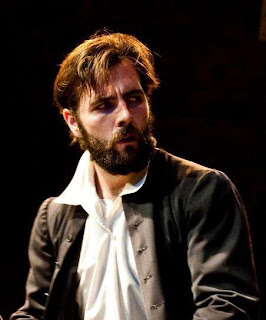 When he left ISU and went to New York, Mickey showed up in (and got great reviews for) a show called "Wake" at Aisling Arts, and then he came back to the Midwest for awhile, including a stint in Wisconsin this summer, where he's currently in "Man of LaMancha." I'm not sure when Mickey did "The Crucible" (photo at left) but clearly that's on his resume, as well.

Now Mr. O'Sullivan has shown up -- looking quite different, mind you! -- in the trailer (or the "teaser trailer," which I'm guessing is shorter than a regular trailer) for a new movie called "Ritual." You can check out that trailer, as well as Mickey in platinum hair, at martinrevelationfilms.com or here on youtube.

Kevin Michael Martin directed the film, which features cinematography by Jack Martin. According to the website, "Ritual" involves a group of college freshman on the night they are initiated (and presumably hazed) at a fraternity. It's set for a Spring 2013 release. Looking kinda scary there, Mickey.
Posted by JulieK at 7:43 PM