Memories of the Station Theatre's First 40 Years... In Book Form! 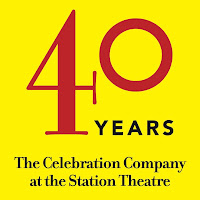 You may've noticed that last season was the 40th anniversary season for Urbana's Station Theatre. They had a nifty graphic for it, reproduced here, and they had various celebrations for their momentous anniversary, including a "Homecoming" performance of "Rent" to which Celebration Company alums were invited, and a picnic at founder and artistic director Rick Orr's home last month.

I interviewed Orr last December, when the season was at its midpoint, and he gave me a lot of good information about how the Station Theatre came to be and where it was headed. That was a quick look at the Station Theatre's history. Very quick. 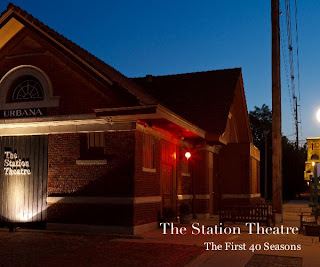 In short, this is a wonderful testament to the Station, and a great way to commemorate a theater that has meant a lot to a lot of people. I can guarantee that anybody who has ever been associated with the Station Theatre is going to be incredibly moved just from leafing through the pages of this memory book. I saw so many of those shows. I was involved in a few. I remember those amazing performances and those amazing people. And now I can keep on remembering, with photo evidence!

If you'd like to own a copy of "The Station Theatre: The First 40 Seasons," you can click here to look at a preview and order your own copy.

(And thanks, Mathew and Lindsay Green. Job well done!)
Posted by JulieK at 4:41 PM