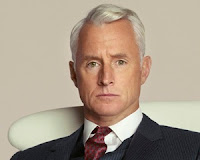 John Slattery and Roger Sterling, the sharp, nasty, outrageous character he plays on "Mad Men," are particular favorites of mine. I've had a fondness for Slattery since he played a union organizer on a show called "Homefront" in the early 90s, and that grew when I saw him on Broadway in "Laughter on the 23rd Floor," a not-that-successful Neil Simon show that starred Nathan Lane as a Sid Caesar-like TV comedian in the 50s. It was Slattery who came out onto the sidewalk after the show and chatted with everybody who was hanging out waiting for an autograph. Nice, funny, talented...

He's done comic appearances on "30 Rock" and "Sex and the City" and even "The Simpsons," so I knew he had the chops. But the news that he will be showing up in a multi-episode arc of "Arrested Development," one of the best TV comedies ever, when it comes back to life on Netflix next year... Well, that's just about the best news ever!

Creator Mitch Hurwitz and the original "Arrested Development" cast, including Will Arnett, Jason Bateman, Michael Cera, David Cross, Portia de Rossi, Tony Hale, Alia Shawcat, Jeffrey Tambor and Jessica Walter, as well as narrator and executive producer Ron Howard, will all be back in at least ten episodes for this Netflix exclusive series. All the people who fell in love with "Arrested Development" when it appeared on Fox for three short seasons, who inundated Fox with bananas (real and toy, I think) to try to save the show, are more than eager for those 10+ episodes already. Adding John Slattery and his whip-smart comic stylings to the mix is like adding hot fudge to your bananas. And making the anticipation even fiercer.

The plan has been to release all ten (or more) episodes at once on Netflix, with space for all of the familiar characters from the first time, plus a few new ones. Jason Bateman tweeted photos from the set, so you know it's happening, too.

No word yet on who Slattery will be playing or how he fits into the Bluth family mix (long-lost child of Lucille's or George's? New suitor for Lindsay? Or Lucille? Or -- heaven forfend -- Maeby?) but it's all good. So let's give a big, "Hey, Hermano!" to John Slattery as we count down the days to 2013 and the return of "Arrested Development."
Posted by JulieK at 4:41 PM