The Return of Fabulous "Fabulation" -- This Week at New Route Theatre

Lynn Nottage's play "Fabulation, or the Re-education of Undine" comes back to New Route Theatre at the Bloomington YWCA this week, and there's all kinds of fun stuff out there in Internet Land to prepare the way. 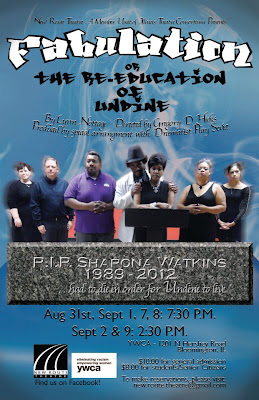 As you may recall, New Route offered "Fabulation" a little more than a year ago as part of its One Shot Deal series at the Eaton Gallery. With limited space and few technical frills, director Gregory D. Hicks and his cast did a very credible job with the material, telling the story of one high-achieving African-American woman brought down by some double-dealing and her own ego. Forced to go back home and mend some fences, Undine (real name: Sharona Watkins) finds the real person under all the pretense, but it's not an easy trip down this particular rabbit hole.

This time out, actress Melissa James Shrader appears as Undine, with a supporting cast that includes Leola Bellamy, Jennifer Cirillo, Corey Hardin, Gabrielle Loft-Rogers, John D. Poling, Miles Spann and Skylar Tempel, with Jennifer Rusk acting as stage manager. New Route Artistic Director Don Shandrow is the producer, which means he is, as always, looking out for the big picture.

Shandrow and Hicks both appear in this video piece about "Fabulation," with cast members talking about their roles and their thoughts on the play in this one, Shandrow giving some info about "Fabulation" from a producer's perspective here, and director/actor Hicks back with Rusk, his stage manager, in yet another behind-the-scenes video, as he talks about how he came to be involved and she discusses her own role with the project.

New Route Theatre is "a multi-racial and multi-cultural theater company that produces new as well as established works that explore the nature of the human spirit in the context of ethical, political, and social choices," with a mission "to do professional quality theatre using a broad spectrum of artists who represent the community in all of its diversity."

"Fabulation" certainly aims for the bull's eye on those targets, as Nottage's script examines the human heart and mind and more specifically, the heart and mind of one female member of the African-American community as she grapples with her choices, good and bad. We see how she tries to reconcile her aspirations with a sense of love and connection, how she fits into the scheme of 21st Century America as a smart, talented, ambitious, pretty darn unlucky woman. Undine is a fascinating character, and Jamelle Robinson did a great job with the character back in July 2011. I can already tell from the videos linked above that Melissa James Shrader will be creating a slightly different Undine/Sharon. Equally fascinating, smart, talented, ambitious and unlucky, you can bet, but still... With the different tones and layers that a new actress automatically brings to the role.

Shrader and Co. are part of that "broad spectrum of artists" the New Route mission refers to, and by doing "Fabulation" twice, they get to include more actors and broaden their spectrum even more. I believe that Corey Hardin and Miles Spann are the only acting holdovers from the first production, which means new shadings almost all around.

"Fabulation, or the Re-Education of Undine" opens August 31 in the New Route space tucked into the Bloomington YWCA. Performances continue September 1, 7 and 8 at 7:30 pm, and September 2 and 9 at 2:30 pm.
Posted by JulieK at 2:28 PM