"These Shining Lives" Opens Next Week at Heartland Theatre Company

"These Shining Lives," Melanie Marnich's play about the so-called Radium Girls, opens next week at Heartland Theatre Company. Don LaCasse directs this story of women poisoned by deadly radium, all because of their jobs at a watch factory.

Marnich's play is an exploration of women's work and basic standards of job safety, as corporate greed and arrogance battle against common decency. She sets "These Shining Lives" during the days when women were entering the workforce in increasing numbers, with Catherine Donahue, the woman at the center of the play, enjoying the camaraderie, sense of self-worth, and, yes, the money she earns painting the faces of glow-in-the-dark watches at an Ottawa, Illinois, factory. But it isn't long before Catherine's dream job becomes a nightmare, as she and her friends are struck down by strange illnesses and horrible pain. One day they are young, vibrant wives and mothers, and the next, withered crones who can barely move.

But at its heart, "These Shining Lives" is about the beauty of life, about finding value in every day, about fighting for what you know is true and right, even when the odds are insurmountable and the path is very steep. The play is based on real events and real litigation that occurred in Illinois

Heartland's cast includes Colleen Longo as Catherine, with Reena Artman, Christine Juet and Paula Nowak as her friends at the watch factory, Jared Kugler as her husband, and Todd Wineburner as the boss. You can see the female part of the cast in the picture below (from left to right: Juet, Nowak, Artman and Longo on the set of "These Shining Lives.") 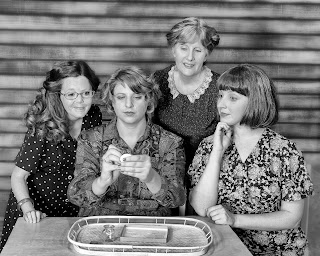 Please note that there will be a panel discussion after the matinee on September 16, with response to the play from Sandra Harmon, Professor Emerita of History and Women’s Studies at Illinois State University, and Ed Carroll, Professor of History at Heartland Community College, who happens to be from Ottawa, Illinois, and whose family was affected by the terrible events at the Radium Dial Plant there. The discussion is free and open to the public.

Heartland's production of the play is sponsored by the Bloomington and Normal Trades and Labor Assembly.

As I said before when I wrote about "These Shining Lives," if you'd like to read more about the dark days when radium was peddled as a scientific miracle and how it all played out with these young women workers at watch factories, Deborah Blum, a Pulitzer Prize-winning science writer and professor of journalism at the University of Wisconsin, offered a series of illuminating pieces on the subject in March 2011 at her blog, Speakeasy Science. You can read The Radium Girls, Life in the Undark, and A Dazzle in the Bones by clicking on their titles, and find out about the forensic pathology as well as the case itself.

Author Bill Koralik also has materials to contribute on the subject; he is the co-author of a book called "Mass Media & Environmental Conflict," and Chapter 8 of that book is offered here under the title "Radium Girls," including graphics and images to flesh out the story.

It's fascinating stuff, both as history and as drama. Tragic. Unbelievable. And still fascinating.
Posted by JulieK at 6:43 PM