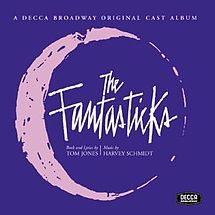 If you know anything about "The Fantasticks," the prototypical off-Broadway musical, it's probably that it is the world's longest-running musical. And that's still true as far as I know, even though that original Greenwich Village production did get interrupted for awhile. But "The Fantasticks," with music by Harvey Schmidt and lyrics by Tom Jones, opened off-Broadway on May 3, 1960, and then ran for 17,162 performances over the next 42 years, finally closing on January 13, 2002.

Since 1960, it's been performed all over the world by more companies than you can shake a stick at. And it came back to New York in 2006 at the Jerry Orbach Theatre inside the Snapple Theater Center on West 50th Street in Manhattan. Where it's still playing, of course. I wouldn't bet against another 42 years.

One intriguing note about the current production: John Davidson is in it. He's now playing the Old Actor* but in 1964, he played the boy, Matt, in the Hallmark Hall of Fame TV broadcast of the show. My friend Jon recently found a video of that production on Youtube, and he kindly shared it with me.

Jon set it up by noting that it had been "cut down to an hour, minus time for three commercials. It does get rushed, but on the whole the condensation helps it, I think (we lose all that business with the actors' troupe, as well as the now-impossible 'Rape' song), some of the intended fantasy and unreality comes through, and all five of the cast really deliver: Ricardo Montalban as El Gallo, two great old vaudevillians for the fathers (Stanley Holloway, Bert Lahr), two appealing and talented kids (John Davidson, Susan Watson). And a fine set of orchestrations for the occasion by Phil Lang."

That production, which you can see for yourself right here, was broadcast on October 18, 1964. As Jon said, it starred Davidson opposite Susan Watson as Luisa, the girl, with Bert Lahr and Stanley Holloway as the two dads and Ricardo Montalban as El Gallo, the narrator of the piece.

Yes, that's right. "Khaaaaan!" played El Gallo and sang "Try to Remember," the hit song from "The Fantasticks." Quite nicely, as it happens. He'd done a number of films and even a couple of Broadway musicals, making him a star already, even though it would be a few years before his "Star Trek," Corinthian Leather or "Fantasy Island" gigs. But Montalban clearly had the charm and style to be a fine El Gallo. His voice is a little lighter than Jerry Orbach, who famously originated the role back in Greenwich Village, but still... Montalban fits the bill.

Before the broadcast, Davidson** had appeared in a Broadway show called "Foxy," with Lahr in the title role, while Watson had played Luisa in the Barnard College production -- a kind of pre-New York try-out -- of "The Fantasticks." Together, they project plenty of sweetness and spirit, making young lovers Matt and Luisa very appealing throughout their story, where they go from the rapture of youthful romance to falling out, growing up and coming home.

Stanley Holloway, best-known for playing Eliza Doolittle's father on stage and on film in "My Fair Lady," is just fine as Luisa's dad, but for me, Bert Lahr pretty much steals the show away from everybody. He's irresistible. He's adorable. Everybody knows Lahr as the Cowardly Lion, but his vaudeville background and acting chops (he was Estragon in "Waiting for Godot" on Broadway) make him a perfect choice for Hucklebee. (Trivia note: Both Holloway and Lahr played Bottom in well-received productions of "A Midsummer Night's Dream.")

A lot of people have fond memories of a "Fantasticks" somewhere in their past, and this TV version may rekindle those feelings. If you're one of that crowd, click here to see the Youtube video. It's well worth an hour of your time. Oh, and you get to see some vintage Hallmark commercials, too, just for the total nostalgia package.

* The Old Actor was part of what was cut for the shorter TV version of "The Fantasticks," so in some ways, it's not really a complete circle for Davidson.

** John Davidson would become something of a teen idol after appearing in the Disney films "The Happiest Millionaire" in 1967 and "The One and Only, Genuine, Original Family Band" in 1968. I recall his grandstand appearance at the Heart of Illinois Fair in Peoria somewhere around 1967 and how I frantically hunted down a paper napkin at the concession stand so that I could get his autograph. I think I was 10. And I cherished that autograph for years.
Posted by JulieK at 6:12 PM