Although labor and labor unions don't seem like prime fodder for entertainment, labor and TV, movies and stage plays have actually had a pretty stellar partnership. As we celebrate Labor Day, I wish somebody had thought to put a few labor-intensive shows on my tube instead of the "Gossip Girl," Jerry Lewis and "Buffy the Vampire Slayer" marathons we're getting. Not that there's anything wrong with "Gossip Girl," Jerry or Buffy. I'd just prefer some John Sayles or a little Sally Field. Or Christian Bale kicking up his heels. Or Doris Day in her jammies. You can even watch "On the Waterfront" if you want to see the seamy side of unions. Meanwhile, the shows below will remind you that unions started for a reason, and that reason was to protect workers, whether they were in the coal mines, in a textile factory, making pajamas or selling newspapers on the streets of New York.

So what are my favorite labor-related pieces of entertainment? 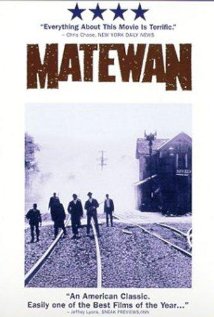 1. MATEWAN (1987)
John Sayles is a movie master, and his "Eight Men Out" is not only a great baseball movie, but also a lesson about management taking advantage of and abusing employees, even when they're star athletes. Sayles also dipped into the waters of workers' rights (without the star athletes) with "Matewan," set in mining country in West Virginia in 1920. As coal miners try to unionize, the company strikes back by bringing in "private detectives" (read: hired thugs) to beat down the miners, set them against each other on the basis of race and culture, and even murder them -- anything to maintain control. Sayles uses some of his regular actors -- magnificent David Strathairn and man-of-the-people Chris Cooper, along with Kevin Tighe and Gordon Clapp -- to show what happens when push comes to shove, when ordinary people have to stand up and do what's right, no matter the consequences. "Matewan" is based on real events. And it's an amazing cinematic achievement. 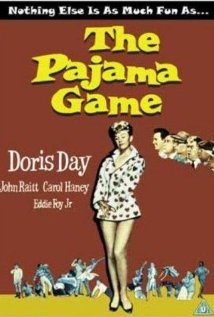 2. THE PAJAMA GAME (1957)
You'll need a break after the tension and drama in "Matewan," so I suggest "The Pajama Game." The poster shown here is for the movie version of the 1954 Broadway hit, with John Raitt (Bonnie's dad) reprising his role as shop steward Sid Sorokin, who represents management and comes into conflict with Doris Day's Babe Williams, the employee rep asking for a seven-and-a-half cent raise for pajama factory employees. It's light and sweet, but there is a message here, as the people "racing with the clock" deserve a pay raise. Janis Paige played Babe on Broadway in '54, with Shirley MacLaine as an understudy in the company. MacLaine famously took over the main dancing role in the show when Carol Haney broke her ankle, and then Shirley got spotted by a Hollywood producer and became a big movie star, right out of the "42nd Street" playbook. Barbara McNair played Babe opposite Hal Linden in the 1973 revival, while Kelli O'Hara took the role opposite Harry Connick, Jr. in the 2006 Broadway production. The score is by Richard Adler and Jerry Ross of "Damn Yankees" fame, and it includes the hit song "Hey There," the one about "you with the stars in your eyes" as well as "Hernando's Hideaway." Olé! 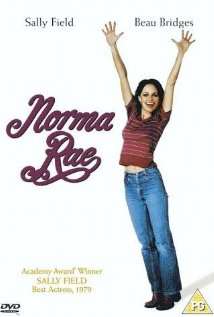 3. NORMA RAE (1979)
"Normal Rae" was a big deal in 1979, with everybody imitating Sally Field's big dramatic moment where, as textile mill worker Norma Rare, she leaps up onto a factory table and holds up a sign that says, "UNION." Director Martin Ritt gave us a movie centered around a warm, appealing character, a single mother just trying to catch a break, someone a lot like the people we know, and Field won an Oscar for the role, changing the trajectory of her career and putting away "The Flying Nun" for good. Like "Matewan," "Norma Rae" is based on a real incident, this time the efforts of a woman named Crystal Lee Sutton to get union representation in a plant in North Carolina. Sutton really did jump up and show her "UNION" sign, getting herself fired and forcibly removed from the premises but she also created a storm, won the fight for a union at that factory, and proved how big one small person can be. 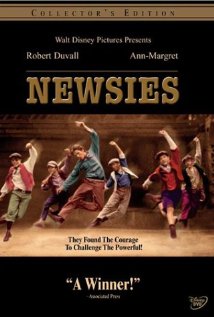 4. NEWSIES (1992)
Child labor laws were one of the major victories of American labor unions, putting an end to five-year-olds dragging carts of coal through narrow mineshafts and tiny children toiling sixteen hours a day in mills, sweatshops and canneries. "Newsies," the musical that tells the tale of the New York newsboy strike of 1899, is about kids who were also workers, and yes, it's another true story. The 1992 film version stars Christian Bale as Jack Kelly, the newsboy who pushes his fellow child laborers to ask for better conditions, while the current Broadway musical features Jeremy Jordan, who will be showing up on "Smash" next season, as Jack for just one more day. Corey Cott, a Broadway newcomer, takes the role on September 5. Also in the cast: Illinois Wesleyan University's Evan Kasprzak. 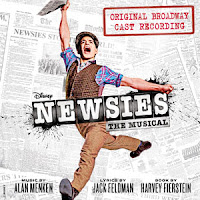 "Newsies" on Broadway won Tony Awards for its score and Christopher Gattelli's choreography. The score is expanded from the film, with music by Alan Mencken and lyrics by Jack Feldman, and a new book written by Harvey Fierstein. "Seize the Day" is the big anthem, and it was part of the show's Tony night performance. If you can't get to Broadway to see the show, and you want more than just the Tony number, you can at least hear it, since the cast recording (cd cover shown above) is available.

You now have four good choices (five, if you count the Broadway version of "Newsies" separately) to celebrate Labor Day. Olé! Seize the Day!
Posted by JulieK at 2:01 PM