Turner Classic Movies knows the key to my heart. Lots and lots of Fred Astaire! 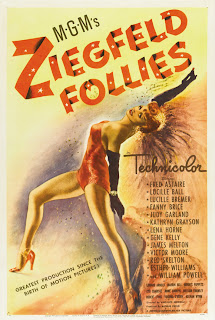 As part of a slate of musicals airing between all day (and moving chronologically from 1939 to 1957), TCM will be offering three fairly unusual Astaire choices.

Ziegfeld Follies is up first, beginning at 6:45 am Central time. It's a 1946 MGM extravaganza starring William Powell as impresario Florenz Ziegfeld. The framing device is Mr. Z, up in heaven, thinking back on his career as the master of the lavish musical revue and imagining a new show starring a parade of Hollywood stars. In the comic sketches and musical numbers that follow, we see the likes of Lena Horne, Judy Garland, Esther Williams, Red Skelton, Lucille Ball and Fanny Brice. Oh, and Fred Astaire. Fred introduces a bevy of beauties with "Here's to the Girls," and dances twice with Lucille Bremer, an MGM starlet at the time. He also dances with Gene Kelly. Yep. The two biggest dancing stars ever. It's the only time Astaire and Kelly were paired on film until they hosted That's Entertainment II in 1976. The comedy bits are pretty creaky (and I never did really appreciate either Skelton or Victor Moore, who shows up, as well) but Astaire is a gem throughout. 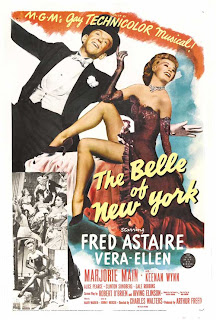 The next Astaire film offered -- The Belle of New York -- begins at noon. Fred is a turn-of-the-century swain, smitten with a straitlaced temperance worker played by Vera-Ellen. He knows he's in love because he starts walking on air. Seriously. It's that fantasy element (all the air-walking) that made Belle of New York a bit of an oddity and maybe accounts for its lack of popularity. Whatever the reason it didn't connect back in 1952, Belle of New York is worth a look now, if for no other reason than it is so rarely broadcast. 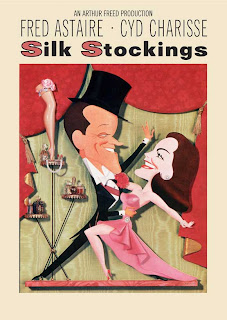 And the last Fred flick of the day is also the last of the TCM musicals o' the day, airing at 3:30 pm. It's Silk Stockings, a Cold War remake of Ninotchka that pairs Fred with the beautiful Cyd Charisse. He's an American film producer, while she's a chilly Soviet agent sent to Paris to get a Russian composer out of Fred's decadent capitalist clutches. But of course, he defrosts Comrade Ninotchka, introducing her to the pleasures of fancy lingerie, champagne and dancing the night away. Along the way, three cultural commisars (Peter Lorre, Jules Munshin and Joseph Buloff) sing about cheery, eerie "Siberia" and how it's "Too Bad, We Can't Go Back to Moscow," in some of the strangest songs Cole Porter ever wrote.

None of these three are among my favorite Astaire movies, but, as I always say, any Fred is better than no Fred.
Posted by JulieK at 8:32 PM