Emmy Night Has Come and Gone 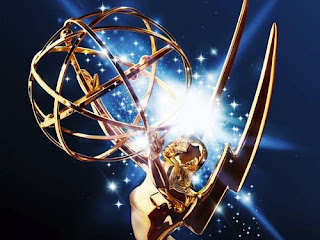 It always drives me crazy that the Emmy voters love shows and especially performers I don't, and they love them over and over and over again. John Larroquette, Cloris Leachman, Rhea Perlman and Michael Richards, I'm still looking at you. Yes, I love Ed Asner. So his pile of Emmys plus all those wins for fabulous West Wing, fabulous Hill Street Blues and fabulous Mad Men are fine by me. They're almost enough to make me think there is merit in the Emmys, after all. Almost.

Last night, with Jon Cryer nabbing Best Actor in a Comedy... I am definitely tipped over onto I Hate the Emmys side. With that one award, the Academy of Television Arts and Sciences showed exactly how irrelevant they are. So very, very.

That's why I'm not going to talk about who won what. Except for Cryer and the Homeland wins and, as always, handing out statuettes to the random movie stars who dropped by (Kevin Costner and Tom Berenger, this time), it was pretty much the same as last year. Feel free to find whatever it was I said about last year's awards and just lather, rinse, repeat. 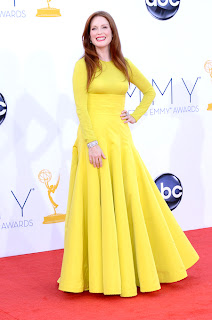 Let's talk about something more fun. The fashion! As always, the Tom & Lorenzo site has a terrific rundown of who wore what, with big, glossy photos, good and bad. They noted all the yellow on the red carpet, and that was hard to miss, what with Julianne Moore, Julie Bowen and Claire Danes all winning and all showing off neon yellow in different shades.

I liked how Moore looked in her big, sweepy Christian Dior gown that was the color of lemon meringue pie, and Bowen looked great on camera, too, in a fitted dress that was more of an acid yellow shade. 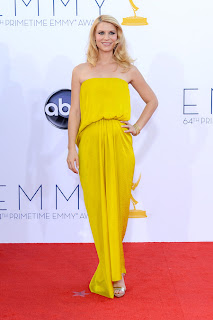 Claire Danes... Not so much. Her dress was a strange, dark mustard yellow that doesn't look good on anybody, plus it made her hair look green, like she'd been swimming in too many chlorinated pools. The dress itself was shapeless and baggy and not at all flattering. Yes, I realize she's pregnant and trying to camouflage it. But there are better ways to do that than wearing a sack dress in a hideous shade.

In the end, I'd say the battle of the yellows goes to Julianne Moore. With that fire-red hair set off against lemon yellow, with the way her skirt moved and flowed, she was a showstopper. 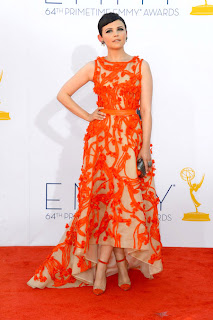 My favorite dress of the night, though, was on Ginnifer Goodwin. It was a strange orange flocked thing, and I hate orange as a rule. But this looked great. Different, eye-catching, fun. And totally her.

Others who looked fab include Amy Poehler, snazzy in a sparkly black dress with lots of cleavage, and Tina Fey in a stunning purple Vivienne Westwood gown with a Byzantine bodice.

Well, now that I've refused to talk about the awards and summed up the fashion, what's left? Jimmy Kimmel. He was aw'ight. Not that funny. Some of the bits were painful. Same old, same old.

John Stewart's swearing was probably the most entertaining thing that happened all night.
Posted by JulieK at 2:06 PM