Illinois Shakespeare Festival 2013 will be the first under new artistic director Kevin Rich, so the announcement of what exactly will be happening next summer has been hotly anticipated. Will it be two Shakespeare plays and something sorta kinda related, as in the past? Something completely different? And what will happen with Theatre for Young Audiences? Inquiring minds want to know! 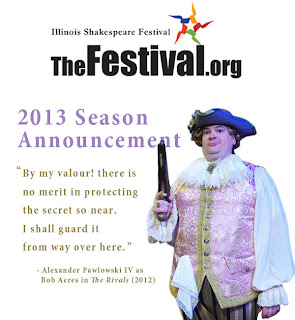 Do I know now? No, I do not. But the news is coming soon, according to information released today by the Illinois Shakespeare Festival. They haven't announced the '13 season, but have announced that they will be announcing it... On Wednesday, October 10th at the Ewing Cultural Center in Bloomington.

It's a long time to wait, even so, but we can pass the time guessing what the new schedule will be. I'll go out on a limb and guess "Hamlet," which hasn't been done here in awhile, "Comedy of Errors," which was last summer's Theatre for Young Audiences choice, and, for something related but not Shakespeare...

My psychic prediction is therefore: "Hamlet," "Comedy of Errors" and "She Stoops to Conquer." If I'm right, I will start... Yeah, never mind. Because, seriously, there is no way I'm right.

One other intriguing hint has been offered, however, since they will be using Two Blokes and a Bus (and their big red double decker bus, just like you'd see in London, except this one is a food truck instead of public transport) to provide a food option for the announcement event.

Will Two Blokes and a Bus be linked to next summer's Shakespeare Festival?

Maybe we'll find that out on October 10th, as well. Stay tuned!
Posted by JulieK at 5:33 PM