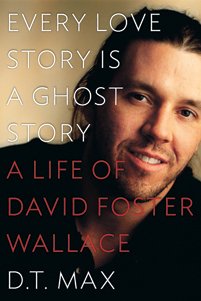 Babbitt’s Books has announced that D. T. Max, author of Every Love Story Is a Ghost Story: A Life of David Foster Wallace, will be coming to Uptown Normal on October 12 to read from and autograph copies of his book.

Max will read from Every Love Story Is a Ghost Story at the Coffeehouse on Beaufort Street at 7 pm on the 12th, followed by a reception and book signing at Babbitt's, directly across the street.

Babbitt's has copies of Every Love Story for sale right now if you'd like to get it ahead, or you can purchase a copy at the bookstore before or after the reading. The Coffeehouse will also have copies of the book to sell at the time of the reading, but those will limited to cash sales.

The subject of the book, author David Foster Wallace spent his early years in Champaign-Urbana, where his father was a professor at the University of Illinois and his mother a professor at Parkland College. Wallace returned to Illinois in 1992 to join the faculty at Illinois State University, where he wrote his most famous book, Infinite Jest. It was during his time at ISU that Wallace became attached to Babbitt's Books, which he called his favorite bookstore in a piece in Condé Nast Traveler magazine. Wallace's unfinished novel The Pale King was released posthumously in 2011, and Babbitt's also held a reading and celebration of Wallace's life in conjunction with its publication.

Max's new book has been well-received, with Dave Eggers, author of A Heartbreaking Work of Staggering Genius, calling the book "very well researched, deeply sympathetic, and incredibly painful to read. We should feel grateful that this story was told by someone as talented and responsible as D.T. Max."