As you make plans to attend this year's Discovery Walk at Evergreen Cemetery, you should also know that you'll have another chance to interact with some of Bloomington-Normal's historical personages. In what is being billed as "dinner with a dose of drama," Beyond the Books Educational Foundation will celebrate its 20th anniversary with a "Spirits of Educators Past" dinner theater performance starting at 6 pm on Thursday, October 25. 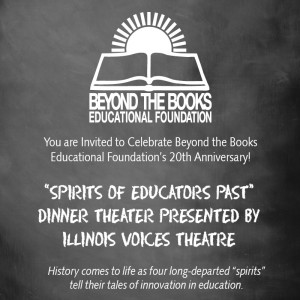 This event is presented in conjunction with Illinois Voices Theatre, the organization that arranges the theatrical part of the Discovery Walk. Judy Brown, artistic director of Illinois Voices, is acting as co-director for these "Spirits." The program will include four characters who had a significant impact on education in the Bloomington-Normal area, including Jesse Fell (played by Todd Wineburner), Sarah Raymond (played by Devon Lovell), Arthur Pillsbury (played by John Bowen) and Georgina Trotter (played by co-director Kathleen Kirk.) Three of the four have made appearances at the Discovery Walk in previous years, and Kirk's character, Georgina Trotter, will be there this year.

"Spirits of Educators Past" is being held at the Brown Ballroom at the Bone Student Center on the Illinois State University Campus. Tickets are $40 per person (including dinner and the performances) and available online or by phone at 309-530-2320. They are also available at a variety of local shops and offices, and you can see that list, as well as the menu for the dinner part of the evening, here.

Beyond the Books Educational Foundation awards grants to public school educators in McLean County Unit District No. 5 and Bloomington District 87, offering them the opportunity to "go beyond standard classroom experiences." In the last 20 years, Beyond the Books has awarded almost $400,000 to area educators to help them expand the scope of their teaching with creative, innovative projects that would be otherwise beyond the limits of school districts’ budgets.
Posted by JulieK at 9:47 AM

Email ThisBlogThis!Share to TwitterShare to FacebookShare to Pinterest
Labels: Beyond the Books, Illinois Voices Theatre