The Office and Parks and Recreation are back! NBC's Thursday night comedy line-up has been its calling card for a good, long while and, for the most part, I have been on-board with that. Cheers, The Cosby Show, Seinfeld, Family Ties, Friends, Frasier... Some very good stuff there.

More recently, we've had Community, Parks and Recreation, 30 Rock and The Office. They haven't enjoyed the boffo ratings of Cosby and Seinfeld before them, but they've made me happy, anyway. 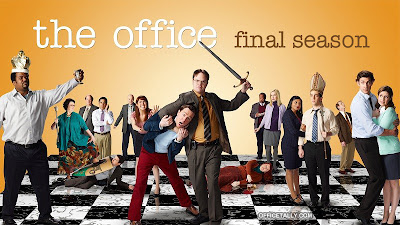 Even so, I was severely disappointed with The Office last season, with my major reactions being "All this Andy humiliation is appalling," "OMG Robert California is a terrible character" and "OMG Nellie is terrible character." So I tuned in last night with some trepidation. Can this sinking ship be righted?

Mindy Kaling and B. J. Novak have left the building, and their characters' departures were dealt with right off the top in the season premiere episode, which aired last night. That prologue/back story/catch-up was funny and disposed of both Kelly Kapoor and Ryan the Former Intern as neatly as possible.

The other big development was that two new people have been added. One is schlubby and wears glasses and has been dubbed Dwight, Jr. by his colleagues, while the other is bright and good-looking and serves as The New Jim. Neither Dwight (Rainn Wilson) nor Jim (John Krasinski) appreciated that, and a big chunk of the episode was devoted to how they handled the comparisons as well as feeling old and over the hill in general. We also found out that Dwight is not the father of Angela's baby, and that Angela's husband may be having some kind of thing on the side with Oscar (Oscar Nunez). Oscar also took a car that had belonged to Angela (Angela Kinsey) after rigorous adoption interviews conducted at the office.

The "Dwight and Jim Feel Old" section overlapped Andy's plot, which involves him hating on Nellie, who is still hanging around for inexplicable reasons. Now, instead of "Humiliate Andy" as the game du jour, we're getting "Get Nellie." It's not anymore fun than the first one.

Overall, I found the episode pretty much as cringeworthy as last season, although Creed was pretty funny summing things up in his usual clueless way. GRADE: D for DOPEY and DISMAL 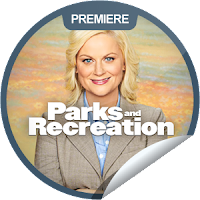 Parks and Recreation is a better show all around, and unsurprisingly, it had a better season premiere, too. It dealt with reunions, as Leslie (Amy Poehler) and Andy (Chris Pratt) went to Washington DC to see their romantic partners, Ben (Adam Scott), now working on a congressman campaign, and April (Aubrey Plaza), who went with Ben as his intern.

The reunions were sweet and funny, and sad, too, as everybody figured out that long-distance relationships are tough to keep up. Leslie also realized how small and unimportant her (previously) exciting job on the town council is when compared to Ben's new high-powered gig, as shown by cameos from Senators Barbara Boxer, Olympia Snowe and John McCain, who were all fun and fizzy in their brief roles. So far, Leslie and Ben are working hard to stay together (even if it's on Skype) but we know it's rough sledding ahead.

Meanwhile, back in Pawnee, Ron Swanson (Nick Offerman) didn't agree with how the usual employee-appreciation BBQ should go, and the unappealing Ann-Tom match-up was officially declared over, even though they felt the need to pretend they were still into each other. I totally didn't get that last part, I hate them together, and I hope they can split up and play scenes with other people now.

For me, the A (Leslie Goes to Washington), B (Ron Makes a Hash of the Picnic) and C (Andy Is a Goof) stories all worked, with only that slacker about Ann (Rashida Jones) and Tom (Aziz Ansari) leaving me cold. GRADE: A for AWESOME

Can't wait to see how Leslie and Ben survive their troubles. Probably won't waste any time on how they write off Dwight or how the new guys fit in The Office.
Posted by JulieK at 10:16 AM

Email ThisBlogThis!Share to TwitterShare to FacebookShare to Pinterest
Labels: NBC, Parks and Recreation, The Office