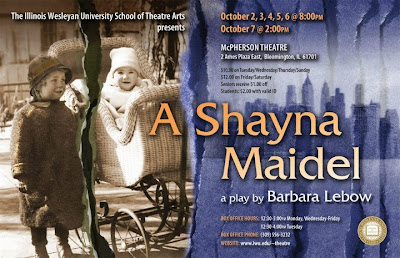 Illinois Wesleyan's School of Theatre Arts opens its fall season Tuesday night with Barbara Lebow's A Shayna Maidel, a play about two Polish Jewish sisters separated by the Holocaust. Rose, the younger sister, escaped from war-torn Poland with her father, but her mother and sister, Lusia, were left behind when Lusia fell ill. By the time she was well enough to travel, the Nazis had overrun the area, sending Lusia and her mother into a concentration camp. Lusia survived, but her mother did not. When the play begins in 1946, Rose has become a very Americanized, very stylish New Yorker, and the unexpected reunion with her long-lost sister leaves her conflicted and unsure. There's confusion, guilt, a huge cultural gap, and unwanted feelings. Is it going backwards to remember how it used to be? And how can you form a family with someone you don't even know?

Lebow's play bowed off-Broadway in 1987, with Melissa Gilbert as Rose, followed by a 1992 TV movie called "Miss Rose White" where Kyra Sedgwick took the role. Both versions received good notices, as audiences were taken with the emotional depth and universal themes in the script.

Loitz's production of A Shayna Maidel opens in McPherson Theatre on Tuesday, October 2nd, with an 8 o'clock performance. Performances on Wednesday, Thursday, Friday and Saturday are also scheduled for 8 pm, with Sunday's matinee beginning at 2 pm. For ticket information, call 309-556-3232 or click here for the box office webpage.
Posted by JulieK at 2:23 PM