The Intriguing "Equivocation" Makes It to Chicago 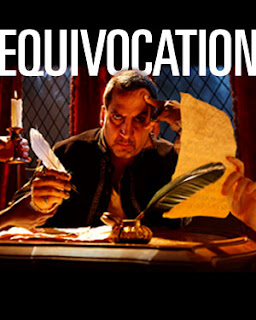 Bill Cain won the Steinberg New Play Award for Equivocation back in 2010, and when he accepted his award (and his check), he gave a great speech along with it. I said at the time that I hoped Equivocation would get a production close to me sometime soon.

Victory Gardens' press info describes the play like this: "In London in the year 1605, a down-and-out playwright called Shagspeare (yes, it’s him) receives a royal commission to write a play promoting the government’s version of Guy Fawkes’ treasonous Gunpowder Plot. As Shag navigates the dangerous course between writing a lie and losing his soul, or writing the truth and losing his head, his devoted theatre troupe helps him negotiate each step along the way. At once an explosive comedy of ideas and a high-stakes political thriller, Bill Cain’s award-winning Equivocation deftly reveals the cat-and-mouse games in politics and art, and the craft of learning how to speak the truth in difficult times."

In interviews, Cain has said that he was trying to write about "how theater people live. It’s about a bunch of hairy, quarreling guys in Shakespeare’s company telling stories."

Hairy, quarreling guys hanging out with Shakespeare telling stories... What could be more fun?

We deal with Shakespeare a lot around here, so I think "Equivocation" should be right up our Bloomington-Normal Illinois Shakespeare Festival alley. Anybody for a road trip?
Posted by JulieK at 2:28 PM