Last night, two new fall shows bowed, with "The Mob Doctor," starring Jordana Spiro as a tough surgeon who can't get rid of family ties to the mob, and "Revolution," the one where electricity (and apparently fossil fuels?) have been wiped from the world. Oddly, both showed off Chicago sets last night, with our "Mob Doctor" tied to Bridgeport on the South Side and "Revolution" offering the Loop partially under water and Future World Wrigley Field (where we see that the Cubs won the World Series in 2012, which is probably reason enough for the world to get zapped.) 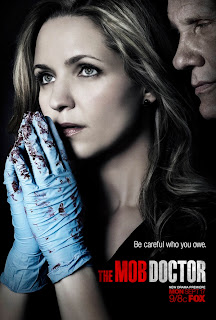 "The Mob Doctor" is on Fox, and it is, I think, a strange little show. Spiro is a bit more world-weary than your normal TV doc, and her issues trying to save patients, spar with an unethical superior at the hospital, and keep her brother, the one whose gambling debts got her into this mess, from getting rubbed out by the mob, are certainly a unique mix. In last night's premiere, she bucked the system at the hospital, refused to kill a prosecution witness in the operating room to appease the thug threatening her brother, and got a favor from a more powerful crime boss to get rid of that threat entirely. Unfortunately, that put her into even hotter water with the new overlord. The show has a gritty, no-nonsense look and feel to it, and there was even a chase scene under the L tracks in the premiere.

I don't know Spiro, who is apparently from "My Boys" and "Dexter," but she was fine, and she has an excellent supporting cast with Zeljko Ivanek as a hospital administrator on her side, Zach Gilford ("Saturday Night Lights") as her love interest, and William Forsythe as the Big Bad who helped her out, with a large price tag attached.

Although I did stay tuned for the whole hour, I can't say I was enthralled or compelled enough to go back. Honestly, the premise seems clunky and forced, and I'm not sure it's strong enough for episode after episode of the same hospital/crime mashup. 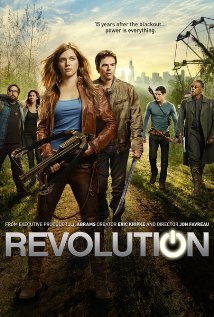 Daniella Alonso is properly smart and feisty as the girl with the crossbow, and she is backed up by Billy Burke as her uncle, someone she hadn't seen in 15 years, but who is now on her team as they look for her little bro. Her life is further complicated by an attraction to a hunky guy who seems to be on the wrong team, even though he's saved her life a couple of times already.

The great actor in the background on "Revolution" is the eminently watchable Giancarlo Esposito, who never puts a dramatic foot wrong.

It's fun to see the famous Chicago Theatre sign distressed and wet, and the Cubs in-joke is amusing. And the sword fight in the pilot was quite nicely done. But how long can they keep Nora and Uncle Miles moving, not finding Danny, but somehow staying away from Captain Neville and his evil minions and their superior firepower?

I confess I am also not clear on the underlying mythology of what exactly does and doesn't work in this "Revolution" world. Guns, crossbows, engines, dams? Why and how do these work or not work under the No Power rules?

"Revolution" looks a lot spiffier than "The Mob Doctor," with a pilot episode directed by Jon Favreau, but even so, it's not really the kind of thing I'm likely to keep watching. "Revolution" takes the 9 pm slot on Mondays on NBC.
Posted by JulieK at 9:03 AM