"Once Upon a Time" Is Back, Sans Curse, Avec Magic 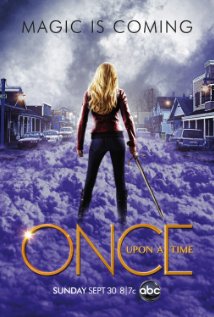 When we last saw the residents of Storybrooke on ABC's Once Upon a Time, they had just lifted the Evil Queen's curse, meaning they all suddenly knew they'd once been fairytale characters in an alternate world. Boom! Zap! Young Henry was revived by love after eating a poisoned apple, Snow White and Prince Charming remembered who they were and ran into each other's arms, and Belle found her way back to her Beast, who happened to be Rumpelstiltskin.

But lots of questions remained about how the town and its assorted fairies, dwarves, witches, princes, princesses, werewolves, puppets, crickets and one very Mad Hatter would be affected by the end of the curse and the rolling purple smoke now filling the town.

Tonight, Once Upon a Time came back, complete with the magic unleashed by Rumpelstiltskin. So what does that mean?

Well, we got to see Emma, the take-no-prisoners real woman who'd started Storybrooke's clock ticking again, reunited with her parents, Snow and Charming, who appear about the same age as Emma because time was stopped in Storybrooke while she was growing up in the outside world. They didn't fuss about that weirdness for too long, though. Mostly they just deferred any explanations till later, since they had major evil to fight, and, as a family, they are really into fighting evil.

We also saw the townspeople try to torch Regina, the Evil Queen, and Rumpelstiltskin send some sort of scary wraith after her. There's a magical medallion that burns its imprint into the hand of its owner working here, too, with flashbacks (or flashes sideways) to The Enchanted Forest and some new characters also wrangling with the same medallion and the same wraith. Those characters are a royal couple (Philip and Aurora) and Mulan, a Chinese warrior who has been fighting alongside Philip. Both girls seem to be enamored of Philip, who has a dangerous run-in with the medallion and the wraith.

In case you're not down with Disney characters, Aurora comes from the 1959 Sleeping Beauty, and she is considered to be No. 3 in the line of princesses they market to young girls, right after Snow White and Cinderella, who already exist in the Once Upon a Time universe. Mulan didn't get the Disney treatment till 1998, when the movie Mulan came out, but she's got her bonafides, too.

The really intriguing thing about this first episode didn't happen till the very end, when we find out that the curse didn't touch a certain corner of Fairytale Land, the corner where Mulan and the Prince were hanging out. They were suspended in time, too, but not swept away to Maine like all the others. But now, when evil Regina does not get offed by the wraith but does get medieval on Emma and Snow, the two of them end up dumped back into that tiny, torn-up corner of Fairytale Land, with Mulan and Aurora ready to smack them down for perceived injuries to Philip.

War of the Women, coming up?

As a season premiere, I didn't feel this episode was really an A+. More like a B-. It wasn't very action-packed, for one thing, and the wraith seemed a bit too much like Harry Potter's Dementors. Not that there's anything wrong with Dementors. It's just that an ogre or a banshee might'vebeen amusing as an alternative.

I did think they did a good job of introducing the new people (Sarah Bolger as Aurora, Jamie Chung as Mulan and Julian Morris as Philip) without losing sight of the old ones, although the mysterious man at the very beginning was a little too mysterious for my taste.Is he Rumpel's son? Henry's bio dad? One and the same? Or somebody else whose identity will be revealed later? Not really enough clues to whet my whistle.

I'd like to see Regina (Lana Parilla) defanged for a bit longer than two seconds, and Snow (Ginnifer Goodwin) and (Josh Dallas) Charming step up and not be so stupid. I'd also prefer Rumpelstiltskin (Robert Carlyle) and Belle (Emilie de Ravin) get it together and create a formidable team rather than fight with each other. We saw a hint at the end that that might happen (plus a chipped mug. Yay, Chip!) as well as Regina back in full-on evil form, while Henry goes home with his granddad, Prince Charming. Kinda sweet. I also appreciated the fact that Snow and Emma (Jennifer Morrison) may have some bonding time while they're stuck in Alterno World. This is, after all, Emma's first taste of Fairytale Land, so it should be fun seeing how she handles it. I also see some parallels between tough girls Mulan and Emma and pretty princesses Aurora and Snow, and it'd be awesome if they all form a kick-ass girl group to go after Regina.

But what about Red Riding Hood, Granny, the Mad Hatter, Jiminy Cricket, Pinocchio and Gepetto, the Seven Dwarves, the Blue Fairy, and all the other characters they set up last season? Not much info there. I guess we have to wait and see.

I liked Once Upon a Time well enough last year to go along for the ride, even if it does take time. But don't try my patience too long, Horowitz and Kitsis. I like some development and relationship changes, too.
Posted by JulieK at 8:25 PM

Email ThisBlogThis!Share to TwitterShare to FacebookShare to Pinterest
Labels: Mulan, Once Upon a Time, Prince Charming, Sleeping Beauty, Snow White