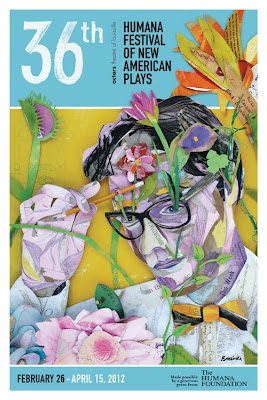 The official packet arrived yesterday to let me know that the 2012 Humana Festival of New American Plays at Actors Theatre of Louisville 1) has set its slate of plays, 2) organized the packages that play-goers can choose from, and 3) is open for business and ready to take your reservations.

The line-up for the two Theatre Industry Weekends on March 23-25 and March 30-April 1 includes (with descriptions from Actors Theatre's brochure):

DEATH TAX by Lucas Hnath. Directed by Ken Rus Schmoll. Maxine is rich. Maxine is dying. Maxine thinks Nurse Tina is trying to kill her. When the patient confronts her caretaker, her accusations have unforeseen--and irrevocable--consequences, in this tightly-wound thriller about money, power and the value of a human life.

EAT YOUR HEART OUT by Courtney Baron. Directed by Adam Greenfield. Alice and Gabe are desperate to adopt a child. Nance, a single mom just starting to date, struggles to connect with her teenage daughter Evie. And Evie wishes her best friend Colin would fall for her rather than just trying to fix things. With both humor and aching insight, these lives are woven together in a tale of parental hopes and fears, and of hearts consumed by longing.

THE HOUR OF FEELING by Mona Mansour. Directed by Mark Wing-Davey. It's 1967 and the map of the Middle East is about to change drastically. Fueled by a love of English Romantic poetry, Adham journeys from Palestine to London with his new wife, Abir, to deliver a career-defining lecture. As the young couple's marriage is tested, Adham struggles to reconcile his ambitions with the pull of family and home. But what if seizing the moment means letting go of everything he knows?

HOW WE GOT ON by Idris Goodwin. Directed by Wendy C. Goldberg. Hank, Julian and Luann are the flip side to the A story of hip hop's rise in the late 1980s--kids who forge a cultural identity in the white suburbs by dueling with poetry in parking lots and dubbing beats on a boom box. In this coming-of-age tale remixed, a DJ loops us through the lives of three Midwestern teen rappers who discover the power of harmony over discord.

MICHAEL VON SIEBENBURG MELTS THROUGH THE FLOORBOARDS by Greg Kotis. Directed by Kip Fagan. Meet Baron Michael von Sirbenburg: a 500-year-old Austrian bachelor living in an American city, whose secret of eternal youth involves endless first dates and a special meat tenderizer. But when his landlady gets suspicious and the ghost of a medieval comrade commands him to take Constantinople back from the Turks, Michael finds himself haunted by past and present. A hilariously dark comedy about the rigors of vampiric immortality.

THE VERI**ON PLAY by Lisa Kron. Directed by Nicholas Martin. When Jenni called customer service, all she wanted was to fix a minor problem with her cell phone bill. Instead she was sucked into a vortex of unimaginable horror. Now she wants revenge--or to get her cell phone service turned back on. Part thriller, part screwball comedy, part inspired by events that have undoubtedly happened to YOU.

OH, GASTRONOMY! by Michael Golamco, Carson Kreitzer, Steve Moulds, Tanya Saracho and Matt Schatz. Directed by Amy Attaway. C0-conceived and developed with Sarah Lunnie. Performed by the 2011-12 Acting Apprentice Company. Food, that delicious human unifier, is rife with contradiction. It can signal both comfort and compulsion, imply both nourishment and deprivation, and make your mouth water--or your stomach turn. Get ready to dig in, as five hungry playwrights join forces with twenty-two ravenous Acting Apprentices to serve up the pleasures--and paradoxes--of food.

A program of three 10-minute plays "culled from the National Ten-Minute Play Contest" will also be on the bill during the second Industry Weekend. Actors Theatre just needs to pick 'em.

Just to show how national the Humana Festival truly is: Greg Kotis (Urinetown), Tanya Saracho (Our Lady of the Underpass) and Idris Goodwin (These Are the Breaks) all have strong Chicago ties, while Lucas Hnath (The Courtship of Anna Nicole Smith), Lisa Kron (Well), Mona Mansour (Broadcast Yourself), Matt Schatz (Roanoke) and Courtney Baron (A Very Common Procedure) are New York-based. Michael Golamco (Cowboy Versus Samurai) comes from the West Coast, while Steve Moulds (Emergency Prom) has ties to Minnesota and Texas and Carson Kreitzer (The Love Song of J. Robert Oppenheimer) has worked in Minneapolis, Austin and New York. Coast to coast playwrights!

To see your choices of weekend packages, click here.