Charm for the Holidays in "The Shop Around the Corner" 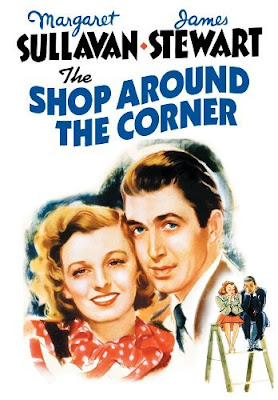 When you think Jimmy Stewart and holiday movies, you probably come up with "It's a Wonderful Life" first and foremost. But there is another choice. There's Ernst Lubitsch's 1940 charmer "The Shop Around the Corner."

This one is less sentimental, but still warm and sweet, more romantic, more Continental. I mean, when was the last time you watched a movie set in Budapest, where the holiday cash registers are ringing up pengő and the shop's cigarette boxes play "Ochi Chyornye"?

"The Shop Around the Corner" is based on a 1937 play called "Parfumerie" written by Miklós László (also known as Nikolaus Laszlo or Laszlo Miklos in some credits.) The play was, obviously, set in a perfume store, while screenwriter Samson Raphaelson turned it into more of a gift shop, selling leather goods, cigarette lighters and music boxes, for "The Shop Around the Corner."

László's play has been adapted and reimagined more than once, with "In the Good Old Summertime" (1949) moving its pen-pal lovers to turn-of-the-century Chicago and a music shop (offering star Judy Garland a chance to sing), "You've Got Mail" (1998) with Tom Hanks, Meg Ryan, computers and rival bookstores, and the Broadway musical "She Loves Me," which keeps the same basic characters and plot while adding a lovely Jerry Bock/Sheldon Harnick score.

Of those adaptations, "The Shop Around the Corner" and "She Loves Me" are at the top of the class for me. Which is why it's such good news to hear that the Normal Theater is offering "The Shop Around the Corner," in glorious black and white, on screen tomorrow and Sunday nights at 7 pm. (Now we just need one of our local musical theater companies to take on "She Loves Me," which they haven't, in my memory. Why not?)

For now, "The Shop Around the Corner" will have to be enough. It's plenty, really. Director Lubitsch is known for the light, mischievous tone of his films, for all those clever "Lubitsch touches," and he delivers beautifully with this film. James Stewart is at his best as hard-working, no-nonsense Alfred Kralik, who has a romantic side he hides very well at work. Looking tall and lanky in a spiffy 40s wardrobe, Stewart has never been more natural or more appealing. Margaret Sullavan (famous for being married to Henry Fonda for a couple of months as well as being one of the subjects of "Haywire," a biographical tell-all by Sullavan's daughter Brooke Hayward) is less attractive, to me, but she and her throaty voice and impish ways do manage to create an interesting heroine. And, again, she brings out the best in Stewart.

The supporting cast is quite marvelous, chock full of character actors you can never see enough of, with the wonderful Felix Bressart bringing life to every scene he's in, Joseph Schildkraut doing excellent work as oily villain and ladies man Vadas, and Frank Morgan quite touching as Mr. Matuschek, the mercurial owner of the shop. Morgan shows he more dramatic chops than you might expect if all you know him from is "The Wizard of Oz," giving "The Shop Around the Corner" a good part of its heart and soul.

"The Shop Around the Corner" is, yes, a romance, with a light, charming tone carried along by snow falling on the street in Budapest, pen pals who share their innermost thoughts and fall in love through words, and the plot device that keeps them prickly in person but still clearly meant for each other. But there is a message here about friendship and connection, too, about how life outside the walls of Matuschek and Co. may disappoint, but the family of co-workers inside can still be there when Mr. Matuschek needs them. It makes for a lovely holiday message.

You may be able to catch "The Shop Around the Corner" somewhere on your television dial this Christmas season, but that is no substitute for seeing it at the Normal Theater this weekend. So.. 7 pm. Saturday and Sunday. It can be your gift to yourself.

There's also a fun trailer for the movie, with a little cameo at the end by Mr. Lubitsch himself, available on youtube.
Posted by JulieK at 1:33 PM