I realize it's down to Crunch Time for holiday gifts, but if those you are buying for are flexible about deadlines, or if you yourself took in some cash from Santa and are looking for theater, TV, movie or music ideas to spend it on... I've got some really excellent ideas. 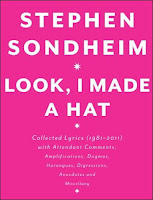 I still think that Stephen Sondheim's "Look, I Made a Hat," his second volume examining and analyzing his lyrics, is a must-have. And its shiny bright pink cover looks festive for the holidays, too.

I can also recommend Katharine Weber's "The Memory of All That: George Gershwin, Kay Swift, and My Family's Legacy of Infidelities," which isn't really as much about George Gershwin and Kay Swift as you might imagine, but tells a heck of a yarn about the author's family history, anyway. Her father, Sidney Kaufman, emerges as the book's most colorful and intriguing character, which is amazing when you consider the other artists, eccentrics and overachievers who dance around her family tree. Weber is an excellent writer who captures a host of personalities quite well.

And my last recommendation in the book category is a new memoir by Edward Petherbridge, who starred in two of the TV choices I've listed below. It tells us how he started on the British stage and came to play roles like those as well as Guildenstern and Chasuble and includes his photographs, sketches and poems along with his prose . It's called "Slim Chances and Unscheduled Appearances," and it looks to be as elegant and charming as any performance he's ever given. Which is to say, quite elegant and charming.

We already talked about the availability of both seasons of PBS's "Downton Abbey" on DVD, along with an attractive companion book. As if those ideas weren't exciting enough, there's a "Downton Abbey" calendar, too! And a Grantham family tea set! You can peruse the entire collection, from jewelry to cloches, here.

While you're on the PBS site, you can see if they've got any of your other favorites. "Poirot"? "The West"? "Broadway: The American Musical"? All covered. 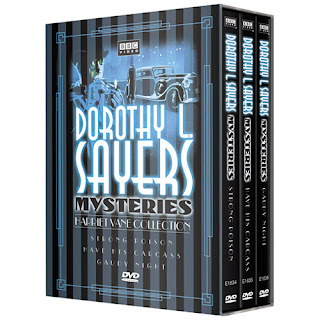 Or you can revisit the Masterpiece Mystery take on Dorothy Sayers' Lord Peter Wimsey, with Edward Petherbridge as the dashing lord with a nose for crime. That set includes "Strong Poison," "Have His Carcase" and "Gaudy Night," for all the best Lord Peter/Harriet Vane interaction.

Although it is no longer available on the PBS site as far as I can tell, the Royal Shakespeare Company's production of "The Life and Adventures of Nicholas Nickleby," which was broadcast as a Mobile Showcase Theatre offering in 1982, is available on DVD. It's a four-disc set, it will take you nine hours to watch it, and it's worth every single second.

Everything you need is at PS Classics. Seriously. New cast recordings of "Follies," "Death Takes a Holiday," "Sondheim on Sondheim" and "A Minister's Wife," studio cast recordings of "Sweet Bye and Bye" and "Strike Up the Band 1930," new albums from Kate Baldwin, Anne Steele and Liz Callaway and her sister Ann Hampton Callaway... Who could ask for anything more?

Yesterday, I told you about the TCM four-movie collection that will get you "Christmas in Connecticut," "The Shop Around the Corner," the Reginald Owen "A Christmas Carol" and a lesser-known holiday film called "It Happened on 5th Avenue." Four movies for the price of one! What a deal! Thank you, TCM.

The "Astaire & Rogers Ultimate Collectors Edition" is an even more stellar idea, offering all ten movies Fred Astaire and Ginger Rogers made together*, along with vintage short films, trailers, cartoons, and a bonus DVD called "Astaire and Rogers, Partners in Rhythm," that has interview clips and behind-the-scenes info about how those lovely movies were made. In other words, lots of cool extras! I like is to stage my own Fred-and-Ginger marathon for New Year's Eve, and this set makes that very possible and very easy. 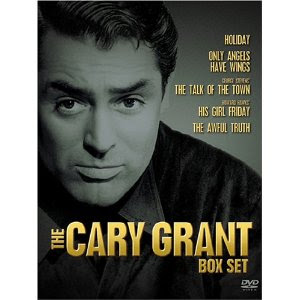 Another favorite of mine is "The Cary Grant Box Set," which includes "Holiday" (my favorite movie of all time, which came late to video and DVD), "Only Angels Have Wings," "The Talk of the Town," "His Girl Friday" and "The Awful Truth." That set, as wonderful as it is, does not include my other top choice among Cary Grant movies, "Notorious," where Cary is a bad boy secret agent type opposite Ingrid Bergman as a bad girl with a soft spot for Cary. Still, it's good news that "Notorious" is available at all, and I'll take it as a stand-alone option.

* Those ten films are "Flying Down to Rio," "The Gay Divorcee," "Roberta," "Top Hat," "Follow the Fleet," "Swing Time," "Shall We Dance," "The Story of Vernon and Irene Castle," "Carefree" and "The Barkleys of Broadway," in case you're keeping track.
Posted by JulieK at 3:42 PM